Obama to visit Ghana in July

WASHINGTON (CNN) -- President Obama will rack up plenty of frequent flyer miles this summer with planned trips in Africa, Russia and Italy. 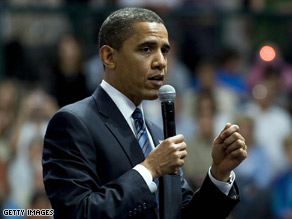 President Obama will travel to Ghana for two days after the G8 Summit in July.

Obama, along with his wife, Michelle, will visit Accra, Ghana, on July 10 and July 11, the White House said Saturday. It will follow Obama's trip to the G8 summit in L'Aquila, Italy, from July 8 to July 10.

"The President and Mrs. Obama look forward to strengthening the U.S. relationship with one of our most trusted partners in sub-Saharan Africa, and to highlighting the critical role that sound governance and civil society play in promoting lasting development," according to the statement.

Obama announced a week ago that he will visit Egypt on June 4 to deliver a speech on America's relationship with the Muslim world.

Egypt is "a country that in many ways represents the heart of the Arab world," White House Press Secretary Robert Gibbs said at the time.

Gibbs deflected several questions at his daily briefing about whether Egypt is a wise choice given President Hosni Mubarak's resistance to making his government more democratic.

Obama originally promised to deliver the speech during his first 100 days, but senior administration officials say the date slipped in part because of security and logistical issues.

Obama has visited Africa before as a senator. In 2006, he received a hero's welcome in his father's native Kenya.

Before the G8 summit, the president is scheduled to travel to Moscow from July 6 to July 8 at the invitation of Russian leader Dmitry Medvedev.

The G8 is made up of Canada, France, Germany, Italy, Japan, Russia, England and the United States.