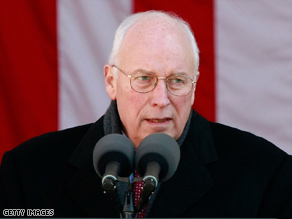 In a written statement, CIA spokesman Paul Gimigliano said the two documents Cheney requested are the subject of two pending lawsuits seeking the release of documents related to the interrogation program and cannot be declassified.

"This request was handled in accordance with normal practice by CIA professionals with long experience in information management and release. It was for them a straightforward issue," he said.

The former vice president will appeal the ruling, an aide said.

Cheney has said he wants the documents released so there can be a more "honest debate" on the Bush administration's approval of "alternative" interrogation techniques against suspected terrorists. He argued that those techniques provided valuable intelligence that saved American lives, but critics say they amounted to the illegal torture of prisoners in U.S. custody.

CNN's Ed Henry and Pam Benson contributed to this report.