The U.N. Security Council and U.S. President Barack Obama on Wednesday called for both sides in Sri Lanka's civil war to protect civilians and allow humanitarian aid into the conflict zone, where tens of thousands are trapped. 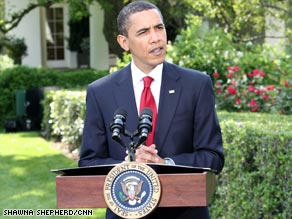 In a statement at the White House, Obama urged Sri Lankan government troops to halt the "indiscriminate" shelling of civilians trapped with the remnants of the country's Tamil Tiger rebels and demanded the rebels stop using civilians as "human shields." Security Council members issued a statement demanding "that all parties respect their obligations under international humanitarian law."

Though the rebels once controlled much of northeastern Sri Lanka, government troops have forced them from all but a small portion of the island since November. The remaining rebel force is pinned down on a narrow strip on the island's northern coast, but more than 50,000 civilians are trapped there as well, the United Nations estimates.

Anna Neistat, of the New York-based Human Rights Watch, told CNN that both sides in the conflict are guilty of "egregious violations" of humanitarian law.

"I think the government claims that they're not using heavy weapons do not pass the laugh test any more," she said. "Witnesses are telling us about the shelling. We also get photos of remnants of the shells that hit the areas."

U.N. spokesman Gordon Weiss told CNN on Monday that hundreds of civilians died during weekend fighting because the Sri Lankan army had put residents in the crossfire, and Obama and the Security Council urged the government to live up to its commitment to stop using heavy weapons. Neistat said at least 30 hospitals had been attacked in the conflict zone as well.

Meanwhile, the Tigers -- who have been branded a terrorist organization by the United States, more than 30 other countries and the European Union -- are refusing to let the civilians who surround them evacuate, Neistat said.

"Witnesses are telling us that they were not allowed to leave, that those who tried to leave were shot at by the Tamil Tigers," she said.

The group, formally known as the Liberation Tigers of Tamil Eelam, have fought for an independent state in Sri Lanka since 1983. As many as 70,000 people have been killed since the civil war began, and nearly 200,000 people are now sheltering in camps across the country's north.

Obama called on the remaining rebels "to lay down their arms and let civilians go."

"Their forced recruitment of civilians and their use of civilians as human shields is deplorable. These tactics will only serve to alienate all those who carry them out," he said. Obama also said government troops "should stop the indiscriminate shelling that has taken hundreds of innocent lives" in recent days.

A Red Cross worker was killed Wednesday during shelling in the conflict zone in Sri Lanka -- the third aid worker killed in six weeks -- the International Committee of the Red Cross said. The fighting between the Sri Lankan government and the Tamil Tigers has intensified in the conflict area to the point that the Red Cross cannot get food to that area or help the sick and wounded, said Sarasi Wijeratne, a Red Cross spokeswoman.

"Without urgent action, this humanitarian crisis could turn into a catastrophe," Obama said. "Now's the time, I believe, to put aside some of the political issues that are involved and to put the lives of the men and women and children who are innocently caught in the crossfire, to put them first."