TEMPE, Arizona (CNN) -- President Obama on Wednesday turned a flap over his commencement speech at Arizona State University into a joke -- then a lesson about never being satisfied with one's accomplishments. 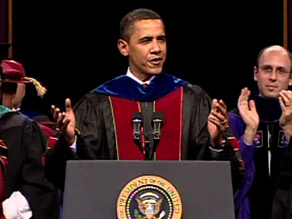 The university said last month that it would not be awarding Obama an honorary degree at the ceremony, saying that "his body of work is yet to come."

Saying he wanted to address "the little controversy everyone was talking about a few weeks back," Obama said, "we all learned an important lesson."

"I learned to never again pick another team over the Sun Devils in my NCAA bracket," he said, referring to the school's basketball team. "It won't happen again."

"President [Michael] Crow and the board of regents will soon learn all about being audited by the IRS," he joked.

The university said no offense was intended. The school eventually announced that it was expanding its most important scholarship program and naming it the President Barack Obama Scholars program.

Obama said he didn't want to dispute the suggestion that he hasn't achieved enough in life.

"I come to embrace it, to heartily concur, to affirm that one's title -- even a title like president -- says very little about how well one's life has been led," he said. "That no matter how much you've done, or how successful you've been, there's always more to do, more to learn, more to achieve."

He called the milestone of graduating from college an important one but urged the graduating students to not rest on their laurels.

"Your body of work is yet to come," he said.

Obama urged the graduates to reject "the greed and irresponsibility that rippled out from Wall Street and Washington," contributing to the nation's economic troubles. He urged them, instead, to pursue a "bigger purpose" -- through service and a principled approach to their professions.

"That other stuff, the trappings of success may be a byproduct of this larger mission, but it can't be the central thing," Obama said. "Just ask Bernie Madoff."

He acknowledged that this year's graduates will be entering the job market at an uncertain time, calling it both a challenge and a privilege.

"Because it is moments like these that force us to try harder, and dig deeper, and to discover gifts we never knew we had -- to find the greatness that lies within each of us," Obama said.

Wednesday's address was the first commencement speech Obama has delivered since becoming president. He is scheduled to give the commencement address at Notre Dame University on May 17.

That speech also has stirred controversy, with some at the Catholic school protesting the invitation to Obama because of his stances on abortion rights and stem-cell research.