(CNN) -- CNN's Larry King sat down with Elizabeth Edwards on Tuesday to discuss her new book, her personal tragedies and the power of resilience. 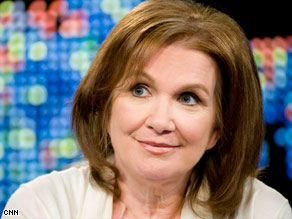 Elizabeth Edwards has written a book on adversity, titled "Resilience."

Here is a portion of their interview.

King: It's a great pleasure to welcome to "Larry King Live" -- known her quite some time now, always great seeing her -- Elizabeth Edwards.

Here in Los Angeles, "The New York Times" best-selling author. Her new book is "Resilience: Reflections on the Burdens and Gifts of Facing Life's Adversities." There you see its cover.

And before we get in to this extraordinary book, why you wrote it and details about it -- and extraordinary, of course, automatic best-seller -- how are you doing physically?

Edwards: I'm doing all right. You know, I'd like, you know, to be killing the cancer a little bit at a time and be on this constant downward slide -- or maybe it's upward -- but it's not like that. It's up and down.

And so I've had some bad results, but right now I'm on a very good track. And the medicine I'm taking right now seems to be working. And I feel pretty good.

King: "All right" is not a great answer. You'd like to hear "great."

Edwards: Well, you know, the truth is, the medicine has side effects. You know? I have very dry hands, very dry feet. I've some numbness, some aches and pains. ...

Watch Edwards discuss her new book, her husband and battle with cancer »

King: Are you in any stage, as they say?

Edwards: Well, we're hoping if we don't move from that stage, you know, you're fine.

King: The fear is it spreads; right?

Edwards: The fear is that it spreads. And it did spread a little bit from March of 2007. That was the -- that was when I had -- when I said the ups and downs. It spread to a bone in my thigh. And -- but the last test I had, everything seem to be stabilized. ...

King: So why write [the book]?

Edwards: Well, honestly, I'm actually really glad you asked this question, because a lot of people are asking that question. And I'm really pleased to have the opportunity to answer.

The book, for people who have actually read it -- people were coming before it actually came out and they hadn't read it -- but those who actually read it will find that seven-eighths of the book is about other things. A very small portion is about our latest problems associated with John's indiscretions. And ... if I had written it without -- you know, it happened after I had agreed to write the book -- if I had written it without that, people would be complaining that I hadn't been honest. I pride myself in being an honest person.

Edwards: Right, one way or the other. So I devoted a very small part of the book to that subject, but 95 percent of the questions by the same people who are complaining about me are exactly on that subject.

King: But being a very bright woman, you knew that that would be the attention-getting of the book.

Edwards: I knew that it would draw attention, and that's why I actually wrote in there, "If you picked up this book in hopes of reading details of a scandal, put the book down now." It's not about that.

King: Did you have any suspicion any time?

King: Not a question?

King: Man on the road a lot?

I was certainly naive.

Watch Edwards talk about her naivete »

King: How about the world "betrayal"?

King: Why didn't you get divorced?

Edwards: Because, you know, a marriage is -- we all know this, it's hard work, you put it together, and you work very hard on it. And the parts that come in, good and bad, include for John that he is an extraordinarily good man.

When he talked about poverty, he meant it. In fact, you know, as we speak, he's working in El Salvador with the Fuller Center and the Homes from the Heart, trying to make certain that people who don't have shelter have that.

I mean, this is something he deeply cares about. That's a good man. He has provided for us. He has -- you know, his fathering has been nearly perfect. His caring for me, with this really big painful exception, has been extraordinary, through Wade's death, through the cancer.

Edwards: Oh, no, you do. You have to say, is that -- is this piece, this piece which is so painful, so big, that it obscures all of those other things. And did I think about that? I did think about that. But in the end I decided it did not.

King: What did you say?

Edwards: You know, I remember a long time ago standing in a line and seeing a picture in front of one these tabloid magazines of an old plane surrounded by dust. And they said, "Abandoned World War II Plane Found on the Face of the Moon."

And I thought, you know, isn't it odd that, you know, CNN and ABC and everybody missed this story that was picked up by this tabloid. At the same time that the stories appeared about John, there was exactly the similar stories appearing about now President Obama.

You know, this is the fodder that they have.

King: So you dismissed them.

Edwards: I dismissed them.

King: What did he say?

Edwards: He said that they -- he told me that they weren't true. And for, you know, a period of time, he was certainly untruthful to me. And, you know, part of the betrayal is not just these -- the acts, but also the breach of the trust that we had between us.

King: How did you find out? Really find -- know the truth?

It was the first time I had ever seen her. I didn't honestly know that the videographer was a female. I mean, this is -- I was completely in the dark.

And that this person had traveled with him, was no longer traveling with him and would not. And he just -- you know, he was contrite. He wanted -- you know, so wanted to hug me and hold me to comfort me, and that's not exactly the moment when I wanted to be hugged.

Later on there was plenty of time for that. But you know, he just told me, and you know, I took it as I suppose most people do, which is very badly.

Edwards: Oh, absolutely. You know, and I don't think he knows. I don't think to this day he knows how he could do this, because if you asked him to rank the things that are important to him, this wouldn't be on the list.

And you know, it's just hard.

King: Did he think that something would come out running for president?

And you know, I thought that a single night would probably not come out. It had been some time before and that if she had wanted to talk about it, she would have plenty of opportunity in the interim to do so and had chosen not to. ...

King: I know, Elizabeth, this must be difficult for you. You also learned, obviously, there wasn't a one-night stand.

Edward: I did. But I learned that, you know, a year and a half after -- after he first confessed to me. And long after the campaign was over.

King: How did you feel about that?

Edward: You know, it threw me. I have to be honest with you. I felt like we had spent a very difficult year plus, trying to work through this. And I like to say that I could just handle it; it's just one time. But it was pretty devastating. And now I had to not only deal with that and more, but I also had to deal with the fact that he hadn't been honest with me. So, you know, the work on rebuilding trust was set back a great deal. And -- and so we're still working on that.

All About Elizabeth Edwards • John Edwards