Obama pokes fun at Republicans, Clinton, self at annual dinner 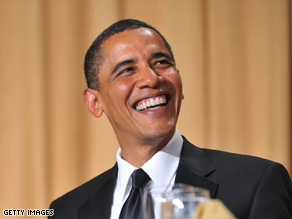 "I would like to talk about what my administration plans to achieve in the next 100 days," Obama said. "During the second 100 days, we will design, build and open a library dedicated to my first 100 days."

The Democratic president poked fun at the Republican Party, saying it "does not qualify for a bailout" and conservative talk radio host Rush Limbaugh "doesn't count as a troubled asset."

Obama touched on a few gaffes during his short time in office, from Vice President Joe Biden's verbose tendencies to an unfortunate Air Force One photo op that frightened New Yorkers -- playfully pointing his finger at his young daughters.

"Sasha and Malia aren't here tonight because they're grounded," he said. "You can't just take Air Force One on a joyride to Manhattan -- I don't care whose kids you are."

As the world shakes off swine flu fears that started in Mexico, Obama noted his old rivalry with former Democratic presidential hopeful Hillary Clinton, who now serves as secretary of state.

"We had been rivals during the campaign, but these days we could not be closer," the president said. "In fact, the second she got back from Mexico, she pulled me into a hug and gave me a big kiss -- told me to get down there myself."

Obama even took on former Vice President Dick Cheney, who wasn't in attendance: "He is very busy working on his memoirs, tentatively titled, "How to Shoot Friends and Interrogate People."

Obama took a somber tone, though, when specifically addressing the reporters in the room -- noting the financial struggles that have afflicted the newspaper industry.

"Across the country, there are extraordinary, hardworking journalists who have lost their jobs in recent days, recent weeks, recent months," he said. "I know each newspaper and media outlet is wrestling with how to respond with these changes. ... Not every ending will be a happy one.

"It is also true that your ultimate success as an industry is essential to the success of our democracy -- it's what makes this thing work," Obama said.