WASHINGTON (CNN) -- President Obama announced new steps to help unemployed Americans on Friday, targeting people who are out of work and want to go back to school. 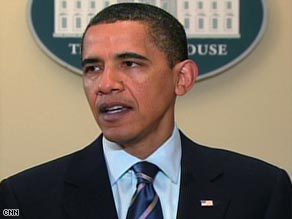 President Obama has made education reform a top legislative priority.

The president outlined a plan under which the Department of Education will send colleges legal guidance, encouraging them to increase financial aid packages for the unemployed so they can enroll in educational and training programs while keeping their unemployment benefits.

Under Obama's initiative, colleges would consider a person's current financial situation to make it possible for them to receive Pell grants, which are available for low-income students. The unemployed person would not lose any unemployment benefits and the maximum Pell grant would be increased in July by $500 to $5,350.

Current unemployment rules create a Catch-22: In most cases, if you are receiving unemployment compensation, you have to be actively looking for a job.

If you want to get more education or training, you have to give up unemployment benefits. But if you return to school, you don't qualify for federal education grants since, in most cases, your qualification is based on the previous year's income.

The government has started a Web site with information on the plan: www.opportunity.gov.

The Labor Department will also issue guidance "strongly encouraging" states to modernize their rules to allow more unemployed to continue their education without forfeiting their benefits.

"In a 21st-century economy where the most valuable skill you can sell is your knowledge, education is the single best bet we can make," Obama said.

The unemployment system should not just be a safety net but "a stepping stone to a new future. ... It should offer folks educational opportunities they wouldn't otherwise have and give them the measurable and differentiated skills they need to not just get through these hard times but to get ahead when the economy comes back."

Obama's remarks came shortly after the government announced that the unemployment rate hit a 25-year high in April, rising to 8.9 percent from 8.5. percent in March. There were signs of hope, however, as the monthly job loss total fell to the lowest level in six months.

CNN's Jill Doherty and Chris Isidore contributed to this report.

All About Barack Obama • Unemployment Rate