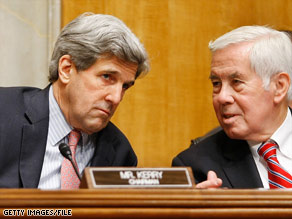 The bill to boost non-military aid to Pakistan was introduced by Sens. John Kerry, left, and Dick Lugar.

The Enhanced Partnership with Pakistan Act of 2009, introduced by Sens. John Kerry, D-Massachusetts, and Dick Lugar, R-Indiana, authorizes $7.5 billion in non-military aid to Pakistan over the next five years to foster economic growth and development, and another $7.5 billion for the following five years.

In a statement released Monday, the senators said they aim to build "a deeper, broader, long-term strategic engagement with the people," rather than just the leaders of Pakistan, acknowledging past U.S. aid to the country had been tied to political events, "sending mixed messages and leading most Pakistanis to question both our intentions and our staying power."

"Today, most Pakistanis believe the United States will cut and run when it serves our purpose, a belief which undermines our long-term efforts to defeat extremists, foster democratic change, and support transparent and accountable institutions that promote security and stability in Pakistan," the statement said.

In introducing the legislation on the Senate floor, Kerry, chair of the Foreign Relations Committee, warned, "An alarming percentage of the Pakistani population now sees America as a greater threat than al Qaeda.

"Until we change that perception there is, frankly, very little chance of ending tolerance for terrorist groups or persuading any Pakistani government to devote the political capital necessary to deny such groups ... the sanctuary that they've been able to receive."

Lugar added, "If Pakistan is to break its debilitating cycle of instability, it will need to achieve progress on fighting corruption, delivering government services, and promoting broad-based economic growth."

In rolling out his new strategy for Afghanistan and Pakistan in March, President Obama called on Congress to pass such a bill, versions of which have been introduced in previous sessions of Congress.

Monday's bill introduction came two days before Obama and Secretary of State Hillary Clinton are to meet with Pakistani President Asif Ali Zardari and Afghan President Hamid Karzai as part of a series of trilateral meetings aimed at coordinating strategy toward the region.

Pakistan's military continues its assault, begun just over a week ago, on militants in Taliban-held areas after they seized territory in violation of an agreement signed this year by Zardari. The deal, criticized by the United States, allowed the Taliban to implement Islamic law, or sharia, in the region where the Taliban is strongest in exchange for an end to fighting.

The recent operations are part of the Pakistani army's intensified drive against the Taliban in its restive tribal regions. The Pakistani government has been criticized for not cracking down on militants along its border with Afghanistan. The militant activity in the border region has led the U.S. military to carry out airstrikes against militant targets in Pakistan. The strikes have rankled relations between the two countries.

Obama told reporters last week that he is "gravely concerned about the situation in Pakistan."

After making two visits to Pakistan in less than three weeks, Adm. Michael Mullen, chairman of the U.S. Joint Chiefs of Staff, is "very alarmed by the growing extremist threat in Pakistan and remains frustrated particularly by the political leadership's inability to confront that threat," according to his chief spokesman. iReport.com: Your questions for Pakistani president

Clinton and Defense Secretary Robert Gates have called Taliban gains in Pakistan an "existential threat" to the country.

The bill takes into account the fluid situation in Pakistan, leaving military aid to be determined on a year-by-year basis. But it requires Obama to certify Pakistani forces are making progress in combating al Qaeda and the Taliban and not interfering with civilian rule in order for aid to continue, a condition both the Obama administration and the Pakistani government have opposed.

The bill also calls for strict benchmarks to measure the effectiveness of the aid. In addition to requiring Obama to submit a report to Congress outlining a strategic plan for the aid, the administration is to submit a report every six months detailing how the money is spent and judging its effectiveness. Clinton and Gates are to submit a comprehensive cross-border strategy for the Pakistani-Afghan border, as well as annual reports on the progress of Pakistani Security Forces.