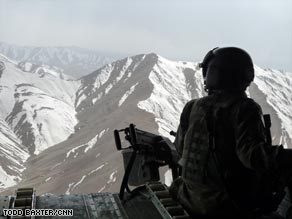 A U.S. soldier looks out of a Chinook helicopter flying over Afghanistan.

"We remain committed to the mission we've been given in Iraq -- make no mistake. ... But Afghanistan has been an economy of force operation for far too long," he said at a Pentagon news conference.

Mullen said he is "gravely concerned" about recent Taliban and al-Qaeda gains across much of southern Afghanistan and in Pakistan.

"This isn't about 'can do' anymore. This is about 'must do,' " Mullen said. The Taliban and al-Qaeda are "recruiting through intimidation, controlling through fear, and advancing an unwelcome ideology through thuggery. ... The consequences of their success directly threaten our national interests in the region and our safety here at home."

Mullen's remarks came less than a week after the release of a State Department report indicating a dramatic spike recently in terrorist attacks in Afghanistan and neighboring Pakistan.

The report stated that al Qaeda and its extremist supporters have moved across the Afghan border "to the remote areas of the Pakistani frontier, where they have used this terrain as a safe haven to hide, train terrorists, communicate with their followers, plot attacks and send fighters to support the insurgency in Afghanistan."

It noted that the largest number of attacks occurred in Pakistani provinces near the Afghan border, including Balochistan, the North West Frontier and the Federally Administered Tribal Areas, where extremists have sought to challenge the government and extend Islamic law.

The president, who is meeting with the presidents of Afghanistan and Pakistan later this week, wants an "understanding that not just the United States faces security concerns, but each individual government has security concerns about extremists in the area," Gibbs said.

Mullen noted that while Obama's decision to increase troop levels in Afghanistan "provides commanders more manpower and more resources ... we need a commensurate commitment from a civilian side.

He said that "more concerted pressure" was needed from the Pakistani government as well.

Pakistan's military recently launched an assault on militants in Taliban-held areas, after the Taliban seized territory in violation of an agreement signed this year by Pakistani President Asif Ali Zardari.

The deal, criticized by the United States, allowed the Taliban to implement Islamic law, or sharia, in the region in exchange for an end to fighting. The recent operations are part of the Pakistani army's intensified drive against the Taliban in its restive tribal regions.

The Pakistani government has been criticized for not cracking down on militants along its border with Afghanistan. As a result, the U.S. military has carried out airstrikes against militant targets in Pakistan. The strikes have rankled relations between the two countries.

Mullen said that while the United States is concerned about recent Taliban and al-Qaeda gains inside Pakistan, he remains confident that Pakistan's nuclear arsenal is secure.

"The worst downside with respect to Pakistan is that those nuclear weapons come under the control of terrorists," he said.

All About Michael G. Mullen • Afghanistan War • The Taliban