ARLINGTON, Virginia (CNN) -- Three prominent GOP leaders kicked off a campaign Saturday to reshape their party's image, gathering at a restaurant in northern Virginia for the first of a series of town hall meetings. 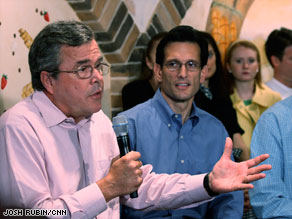 The goal of the initiative, called the National Council for a New America, is to connect Republican leaders with voters across the country to help get the party's electoral fortunes back on track.

"Certainly our party has taken its licks the last few cycles, but that's why we're here," House Minority Whip Eric Cantor said Saturday. "The reality is, the prescriptions coming out of Washington right now are not reflective of the mainstream of this country."

"I would say you can't beat something with nothing. The other side has something. I don't like it, but they have it," said Bush, who praised President Obama's tactical approach to politics and commended his 2008 campaign as "forward-looking."

Romney blamed Washington for setting in motion policies that led to the collapse of the housing market, and painted his party's minority status as a boon.

"We have an advantage," said the former Republican presidential candidate. "When a party has the White House, communication comes [from the] top down, and there's a strategy that everyone has to march behind." Instead, he said, the GOP had the option of drawing its strategy from the grassroots.

"We don't have to come up with all the answers today. Thank goodness, we have a little time," he said. "Certainly by 2010, we better."

The venue -- a packed pizzeria in an Arlington strip mall -- had the feel of a small-town campaign stop Saturday morning, with a supportive crowd tossing friendly questions at the panel. But outside the front doors of the establishment were reminders of the challenges facing the party.

The parking lot out front, even with the heavily Republican crowd inside, was dotted with Obama bumper stickers. Northern Virginia has shifted solidly Democratic in recent elections, and surrogates for John McCain's campaign made statements late in the race that acknowledged the party had all but conceded the area.

But the handful of peaceful protesters out front weren't Democrats -- they were conservatives upset over the new group's agenda and leadership. They brandished signs criticizing McCain, calling the NCNA "RINOs" -- Republicans in Name Only -- and urging them to push for stricter immigration enforcement.

McCain is prominently featured in materials for the new group.

Health care, education and small business growth were all major topics of discussion Saturday -- but immigration was one entry on a long list of potentially divisive social issues that went unmentioned.

Cantor told journalists that the group was not avoiding any topic, although the group's Web site and YouTube video released did not mention abortion, same-sex marriage, or other hot-button issues vital to the social conservatives that form a significant part of the party's base.

"Any topic will be included in the national dialogue," he said. "There are no limits."

Given Obama's command of Washington, it's a good idea for Republicans to take their case outside of the capital, said William Bennett, a CNN contributor and Republican strategist.

"Look, you have to face reality. Barack Obama owns Washington. The Democrats own Washington. So a good place to be is out in the country.

"[Obama's] a huge political figure. I don't agree with him, but the guy blocks the sun. He won the election. He commands everything in sight. He's got a Democratic Congress with him. The media still likes him very much," Bennett said.

The Republican Party, bruised by charges from Democrats that it's become the "party of no," has been forced to rebuild after suffering demoralizing losses in 2006 and 2008. Democrats control the White House, both chambers of Congress and also hold more gubernatorial seats.

And now that Sen. Arlen Specter of Pennsylvania has switched parties, Democrats could reach a filibuster-proof Senate majority of 60 seats if courts uphold Al Franken's disputed recount victory in Minnesota.

Asked about the state of the Republican Party, Obama cautioned Wednesday that "politics in America changes very quickly."

"I'm a big believer that things are never as good as they seem and never as bad as they seem," he said, noting that he was once 30 points down in the Iowa caucuses -- a state he ended up winning.

"I don't believe in crystal balls. I do think that our administration has taken some steps that have restored confidence in the American people that we're moving in the right direction and that simply opposing our approach on every front is probably not a good political strategy," he said at his prime-time news conference.

CNN's John King and Kristi Keck contributed to this report.