WASHINGTON (CNN) -- Justice David Souter informed the White House on Friday he will retire from the Supreme Court, and President Obama said he hopes to have a replacement on the bench by the time the court reconvenes in October. 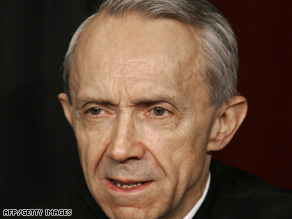 Obama interrupted the daily White House news conference to announce he had just ended a phone call with Souter, who, in a brief letter to the president, said, "When the Supreme Court rises for the summer recess this year, I intend to retire from active service as a justice."

The current term is expected to end in late June. Souter called Senate Majority Leader Harry Reid, D-Nevada, a few weeks ago to tell him that he was going to retire, according to a source familiar with the conversation.

In addition, the president said he will seek "somebody with a sharp, independent mind and a record of excellence and integrity." That person must honor traditions, respect the judicial process and share Obama's grasp of constitutional values, he said.

Sen. Orrin Hatch, the Republican who led the Senate Judiciary Committee when President Bill Clinton nominated Ruth Bader Ginsberg and Stephen Breyer to the court, said Republicans needed to be fair and not seek "a big fight that is ideological."

Watch who some of the contenders may be »

"That is not right," Hatch said. "And I think real senators who know what their responsibilities are will stand up and do what is right. You can't just vote against them because they differ with you in political philosophy."

"It all comes down to qualifications," he said. "If they don't meet those, then a legitimate vote against them is proper. But if they do meet those qualifications, the fact that they are not activists, not political, bodes well for them."

Breyer and Ginsberg, he said, were "both eminently qualified" to serve on the Supreme Court.

But conservative activist Ed Whelan, who heads the Ethics and Public Policy Center, said Republicans had an obligation to make clear "what's wrong" with Obama's vision "and how his nominee reflects that vision."

"I'd much rather President Obama make a quality pick of someone I regard highly as a jurist," Whelan said, but "I don't think that's going to happen. Given that it's not going to happen, I welcome the opportunity for a debate that crystallizes the vast differences between President Obama's embrace of liberal judicial activism and the conservative preference for judicial restraint."

"There is plenty of room for there to be a justice far worse than he is and that seems to be what the left is pushing President Obama to select," he said.

Whelan warned that the court was "on the verge of some very bad rulings," such as "inventing a constitutional right to same-sex marriage" or approving human cloning, and worried that Republicans would "roll over and play dead, exactly as they did in 1993, when President Clinton nominated Ruth Ginsberg."

Speaking to reporters at the White House briefing, Obama described Souter as "not only a good judge, but a good person," adding, "I'm incredibly grateful for his dedicated service."

"I wish him safe travels on his journey home to his beloved New Hampshire and on the road ahead," the president said.

The vacancy will give Obama his first Supreme Court appointment -- the first since President George W. Bush's picks of Samuel Alito in 2006 and Chief Justice John Roberts in 2005.