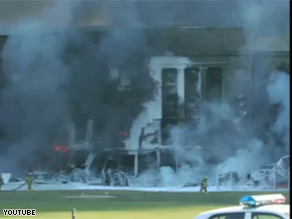 An image of the Pentagon on fire during the 9/11 attacks is used in a new GOP Web video attacking the president.

"We're quite happy to be talking about national security," said a House GOP leadership aide who requested anonymity to speak freely about internal strategy.

The aide insisted that Republicans have substantive, serious policy differences with President Obama on national security, especially with regard to his approach to dealing with detained terror suspects.

But the aide also conceded Republicans believe those differences have a political upside for them.

"It's an issue that traditionally plays well for us," said the aide. "From a political perspective, it will be beneficial over the long run."

The campaign-style video, created by a Boehner aide in his Capitol office, begins with the question, "What are Democrats doing to keep America safe?"

Then, with ominous music in the background, it splices sound bites from news reports and Republicans talking about the dangers of President Obama's decision to close Guantanamo Bay and to release Bush-era memos about harsh interrogation techniques.

The video's climax races through images of Obama hugging the Saudi king, shaking hands with Venezuela's Hugo Chavez and ends with an image of the Pentagon burning on September 11, 2001, followed by a final question: "Do you feel safer?" Watch the ad

"The events of September 11 happened. Pretending they didn't won't make America any safer. And ignoring the fact that it happened is even worse," Ferrier said.

When asked by CNN why he released what some will view as an alarmist video, Boehner said he is trying to "push the administration to tell us: What is the overarching strategy to take on the terrorists and defeat them and to help keep America safe?"

Democrats said such "politics of fear" are scaring voters away from the GOP.

"Is it any wonder that voters and senators alike are running away in droves from the Republican Party? Looks like they have taken a page from the discredited Rove/Bush/Cheney playbook. This ad is nothing more than a pathetic attempt to play up the politics of fear and smear," said Jim Manley, spokesman for Senate Majority Leader Harry Reid.

House Majority Leader Steny Hoyer's spokeswoman, Katie Grant, said, "Republicans are once again resorting to fear tactics because they have no new ideas or constructive policies to offer. The American people have already rejected their politics of fear, and this will be no different."

A GOP source said the idea for the video was born out of strategy sessions among Boehner, his staff, and other Republican leaders about the fact that they believe Obama is increasingly politically vulnerable on the issue of terrorism.

That view is shared by Republicans in the Senate.

"This is one of those cases where good policy makes good politics," said a Senate GOP leadership aide, in describing their decision to pound away at Obama for saying he'll close the Guantanamo Bay prison.

McConnell chastised Gates about the fact that Obama announced his decision to shut the prison before making alternative plans for the prisoners there.

"We haven't been attacked against since 9/11. We like that and we'd like for that record to continue," McConnell told Gates.

President Bush won re-election in 2004 after warning voters that his Democratic opponent, John Kerry, would make them less safe.

In 2008, GOP candidate Sen. John McCain tried to label Obama an inexperienced leader whose policies on Iraq and other global hot spots would jeopardize America's security.

But that stopped resonating as the ailing economy took over as voters' most important priority.

Thursday, economic troubles loomed larger than ever, and a CNN/Opinion Research Corp. poll earlier in April suggested Americans do not agree with Republicans that Obama is making them less safe.

When asked whether the president's actions increased chances of a terrorist attack in the United States, 26 percent said yes and 72 percent said no.

Republicans insisted national security will return to the forefront if they continue to highlight what they call the dangers and unanswered questions about Obama policies.