Specter is 13th senator to switch since 1913

WASHINGTON (CNN) -- Pennsylvania Sen. Arlen Specter announced Tuesday he plans to switch from the Republican Party to join the Democrats. 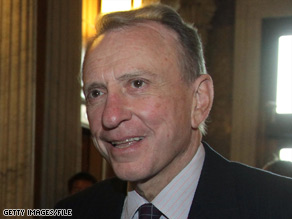 Sen. Arlen Specter announced Tuesday he is switching to the Democratic Party.

With the defection, Specter becomes the 13th senator to switch parties since the direct election of U.S. senators began in 1913.

Recent senators who have switched parties are:

Shelby left the Democratic Party to join the Republicans on November 9, 1994, just after 1994 midterm elections that gave Republicans control of both chambers of Congress.

Campbell left the Democratic Party March 3, 1995, to join the Republicans.

Lieberman lost his state's Democratic primary in August 2006, but won re-election in November as an Independent, though he had not officially changed his voter registration. In the Senate, he continues to caucus with the Democrats.

Jeffords announced on May 24, 2001, that he would leave the Republican Party on June 6, 2001, to become an Independent who would caucus with Democrats. His switch gave Democrats control of the Senate, though Republicans would reclaim the chamber after the 2002 midterm elections.