WASHINGTON (CNN) -- Secretary of State Hillary Clinton told representatives of the world's leading economies Monday that the United States is no longer "absent without leave" in the global warming debate. 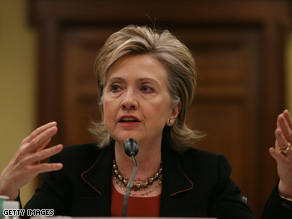 Secretary of State Hillary Clinton tells other countries that the U.S. is "back in the game" on global warming.

Clinton urged greater cooperation in advance of an international climate change conference to be held later this year.

Climate change is "an environmental issue, a health issue, an economic issue, an energy issue and a security issue," she said at the first preparatory session for the Major Economies Forum on Energy and Climate.

"It is a threat that is global in scope but also local and national in impact. ... No issue we face today has broader long-term consequences or greater potential to alter the world for future generations."

The preparatory session, being held Monday and Tuesday at the State Department, is meant to set the stage for the forum leaders' meeting in July in Italy.

"The science [of global warming] is unambiguous and the logic that flows from it is inescapable," Clinton said.

"Climate change is a clear and present danger to our world that demands immediate attention. Facts on the ground are outstripping worse-case scenario models that were developed only a few years ago."

In addition to the United States, the European Union and 15 other countries are participating in the preparatory session. Those nations are Australia, Brazil, Canada, China, France, Germany, India, Indonesia, Italy, Japan, Korea, Mexico, Russia, South Africa and the United Kingdom.

A representative from Denmark also is attending because that country in December will host the U.N. conference on its climate change framework.

At the Copenhagen conference, leaders will discuss a new global agreement on greenhouse gas emission levels to replace the Kyoto Protocol, which expires in 2012.

"The United States is fully engaged and ready to lead and determined to make up for lost time, both at home and abroad," Clinton added. "We are back in the game. We don't doubt the urgency or the magnitude of the problem."

The ruling will allow for "more robust tailpipe emission regulations," she said.

She also highlighted the Obama administration's proposal for a broad, market-based cap on carbon pollution designed to help meet the goal of cutting national emissions 80 percent by 2050.

But international cooperation is needed to develop "meaningful proposals to move the process forward," she added. "New policy and new technologies are needed to resolve this crisis."

Ahead of the talks, environmental activists hung a large banner from a construction crane near the State Department with the message, "Too Big to Fail: Stop Global Warming -- Rescue the Planet." Two protesters dangled from cords hung from the corners of the banner.