Editor's note: How would you rate President Obama's first 100 days? You'll get a chance to make your opinion known on at 7 p.m. ET Wednesday on the CNN National Report Card. 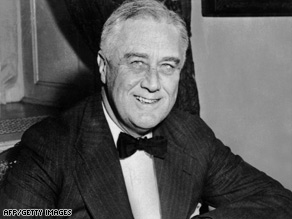 WASHINGTON (CNN) -- Senior White House adviser David Axelrod has called the 100-day benchmark an "odd custom, the journalistic equivalent of the Hallmark holiday.'' But where did the notion of a president's "First 100 Days" originate?

With Franklin D. Roosevelt, another president who took office at a time of dire economic crisis.

Roosevelt used his first 100 days to launch the New Deal, his plan to jumpstart the economy and put people back to work.

Democrats had just won huge majorities in Congress and were ready to do the president's bidding.

But, should Congress fail to act, Roosevelt would ask for "broad executive power to wage a war against the emergency, as great as the power that would be given to me if we were, in fact, invaded by a foreign foe," he warned in his inaugural address.

Congress also approved the Beer-Wine Revenue Act that anticipated the end of Prohibition.

A White House adviser remarked that members of Congress had forgotten to be Republicans or Democrats.

Comedian Will Rogers joked at the time that, "Congress doesn't pass legislation any more. They just wave at the bills as they go by."

Nothing since has equaled FDR's first 100 days.

But as Obama nears the symbolic benchmark, he may have had the boldest 100-day agenda since FDR.

Still, Congress has passed only a few major bills, including the $787 billion economic stimulus package, the public lands preservation bill and an expansion of children's health insurance.

So what has changed?

Presidents can no longer count on the kind of bipartisan cooperation FDR got in 1933 -- even at a time of crisis.