UAW agrees to 'painful' concessions to save Chrysler

CNN) -- The United Auto Workers union announced Sunday it had reached an agreement with Chrysler, Fiat and the U.S. government that meets the requirements of the Treasury Department for loans to the auto giant. 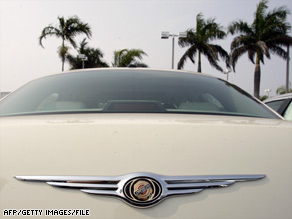 Chrysler, in talks to merge with Fiat, had an April 30 deadline to come up with a viability plan.

In a statement, the UAW said the deal was still subject to ratification by union members at Chrysler.

Union members must approve the deal by Wednesday, the statement said.

"Once again, our active and retired members are being asked to make extraordinary sacrifices in order to help Chrysler return to viability," said UAW Vice President General Holiefield. "In order for the company to have a sustainable future, all stakeholders will have to show the same willingness to contribute to the common good that has been demonstrated repeatedly by our membership."

Chrysler praised the UAW leadership for "their endless determination and perseverance" on the matter, and said it has the "utmost respect for the thousands of men and women who are an integral part of our manufacturing operations."

Chrysler spokesman Ed Garsten told CNN the deal means the automaker can now continue to pursue a partnership with Fiat.

"The provisional agreement provides the framework needed to ensure manufacturing competitiveness and helps to meet the guidelines set forth by the U.S. Treasury Department," Garsten said.

Chrysler had until April 30 to come up with a viability plan that included a merger with Fiat, after the first version of the plan was rejected by the Obama administration in February.

The troubled automaker has already received billions in federal loans, and some feared bankruptcy was imminent.

All About Chrysler Group • U.S. Department of the Treasury