JOHNSTOWN, Pennsylvania (CNN) -- Located outside a small Pennsylvania city, John Murtha airport may not see many passengers. But it's seen plenty of arrivals of tax dollars from Washington, most recently economic stimulus funds. 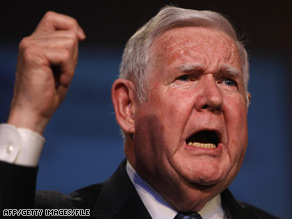 Democratic Rep. John Murtha says it's his job to direct federal funds to his district in Pennsylvania.

The airport offers three commercial flights. In between the arrivals and departures, airport officials admit there are few faces around the facility.

"When the flights are coming in, there are people. Other than that, it's empty," said Scott Voelker, manager of the John Murtha Johnstown-Cambria County Airport.

But one face is everywhere. Rep. John Murtha, the airport's namesake, is hard to miss.

Considered one of "the kings of pork" on Capitol Hill by taxpayer watchdog groups, the 19th-term Pennsylvania Democrat has piloted almost $200 million from Washington to Murtha airport. Much of the funding has come in the form of legislative earmarks that are attached to bills before Congress.

"[Murtha's] dumped in nearly $200 million into this project that has virtually no passengers. It's practically a museum piece," said Steve Ellis with the Taxpayers for Common Sense.

Watch why critics say the airport is wasteful »

On his House Web site, Murtha strongly defends earmarks, saying it's his "job" to direct federal funds to his district.

amFIX: Your thoughts on how congress spends your money

Earlier this year, the airport found a new revenue stream, receiving $800,000 from the stimulus to repave a crosswind runway that's used as a backup to the facility's main landing runway.

Even though Voelker said the runway is perfectly safe, he said he believes the stimulus project "makes a lot of sense." He noted the runway hasn't been repaved since the 1980s. "Asphalt and concrete need to be replaced," Voelker added.

In December, Murtha made a direct appeal to the Federal Aviation Administration to fund the runway project. The request was rejected. At the time, the airport did not meet FAA criteria for funding because the facility had fewer than 10,000 passengers.

But earlier this year, the FAA notified Murtha airport officials the facility had been approved for stimulus funding. The FAA said Murtha did not request the stimulus money.

FAA spokeswoman Laura Brown said Murtha airport received stimulus money because it was "shovel-ready." It "met all of the requirements for the use of the stimulus money," Brown said.

Murtha airport is not the only remote airport landing stimulus funds. According to the FAA's Web site, hundreds of big and small airports across the country are slated to receive $1 billion in stimulus upgrades. Many of the airports are in such far-flung places as U.S. territories Guam and American Samoa. Even King Salmon, Alaska, (population 447) is expecting $9.7 million, according to FAA records. See the records

Taxpayer watchdogs said they wonder if some of that's pork.

"The problem is you're not getting the multiple bang for your stimulus buck that you're looking for," Ellis said.

He added, "when you see deadbeat airports getting cash so they can do their second runway, it really feeds cynicism around the country about the stimulus and about the projects."

Brown defends the use of stimulus money for other remote airports such as Guam.

Murtha airport's manager said taxpayer money is going to waste at his facility, but not on the runway project.

He points to an unstaffed $8 million air traffic radar system installed in 2004.

"It's been sitting over there, and that radar has been spinning for all those years with no purpose. Just sitting there," Voelker said.

Voelker said he has brought the matter up with both the FAA and Pennsylvania Air National Guard, which uses the air traffic control facility.

But he said nobody can explain why the radar system hasn't been staffed.

All About John Murtha • Economic Stimulus