Levi Johnston: 'I didn't think it was going to get this rough'

(CNN) -- A year ago, few outside of Wasilla, Alaska, had ever heard of Levi Johnston. All that changed last summer when Gov. Sarah Palin accepted the Republican vice presidential nomination. 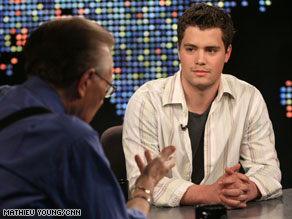 On "Larry King Live" on Wednesday, Levi Johnston talks about his relationship with the Palin family.

Soon after she entered the national spotlight, it was learned the conservative governor's teenaged daughter, Bristol, was pregnant with Levi's baby. The Johnston-Palin family saga has been in the news ever since.

In a "Larry King Live" exclusive interview Wednesday night, Johnston, along with his mother, Sherry, and sister, Mercede, talked about baby Tripp, why he's not seeing much of his son, what his legal intentions are and the Johnstons' ambiguous relationship with the Palins.

Larry King: How are you handling all of this attention?

Levi Johnston: We've got people camped outside the house and in front of my sister's school and that kind of thing. It's pretty crazy.

King: Are you surprised at it?

Johnston: I lived back in a small town. So I mean I never thought that would ever happen to me. And when she [Sarah Palin] finally told, everybody that Bristol was pregnant and stuff, I didn't think it was going to get this rough.

King: Did the Palin family seem close-knit? What was it like for you dating in the atmosphere of the governor's daughter?

Johnston: They always treated me like a son. They were real nice to me. And I thought of her [Sarah Palin] as like my second mother. You know, Todd was always a great guy and helped me out with a lot of things.

King: When it began to be sexual and romantic [with Bristol], did the governor know?

Johnston: You know, I'm not sure. That's a question I can't really answer. But, you know, I think...

King: What do you think?

Johnston: You know, she says she [didn't] know. But I don't know. I think she'd probably know, you know?

King: What about her husband? Do you think he knew?

Johnston: I would think so.

King: Where did sex occur? In their house?

Johnston: You know, Larry, that I'm a gentleman. And I don't kiss and tell. So I don't think that really matters.

King: You said you practiced safe sex most of the time, right?

King: We know that one time that didn't happen. Were you surprised at the pregnancy?

Johnston: A little bit, yes. It came as a bit of a shock.

King: How did you tell Sarah?

Johnston: We went over there and we had one of Bristol's friends over there. And we all kind of sat down on the couch and we ended up telling her that way.

Johnston: She was shocked. I mean she probably didn't really know what to say. No mother wants to hear that her her daughter is pregnant at 18 years old.

King: When the baby, Tripp, was born, was there ever a thought that you would not be the active father of that child?

Johnston: I don't know what happened. I think somewhere along the lines, we just weren't hitting it off anymore and...

King: But they won't let you see your kid?

Johnston: No. I can go over there and see him. But it's kind of an uncomfortable thing for me to go over there. You know, I want to be able to take him and do that kind of thing, go do the father thing with him and I can't.

King: Why can't you?

Johnston: You know, I'm not sure.

King: Do you have a lawyer?

Johnston: We're not in a big fight with the Palins. I still like the family very much. I think we can work things out. I don't think either one of us want to go to lawyers and try to fight for custody and stuff like this.

King: But then why can't you take your baby for a weekend?

King: But you're not interested in finding out legally why you can?

Johnston: I am. If it keeps going like this, I think we're going to have to. ...

King: Now, [upon] further reflection, you might have a lawyer?

Johnston: Yes, I do.

King: OK. So are you afraid that saying you have a lawyer might anger the Palins?

Johnston: I don't want to stir anything up ...

King: When was the last time you saw Tripp?

Johnston: A couple weeks ago.

King: Do you call the house to see how he is?

King: She [Bristol] seems to be really ticked. Is there something you did?

Johnston: That might be the case, but I don't see what it would be.

King: In other words, you have no idea why she's angry?

Johnston: No. I think it has a lot to do with her and my sister. She [Bristol] doesn't trust who she hangs out with.

King: Have you spoken to the governor?

Johnston: I haven't talked to her for quite a while, actually.

King: Well, wouldn't you want to know what part she's playing in not letting her daughter see your son?

Johnston: Yes, that would be nice. I mean, my dad talks to Todd a lot. And after we did that first interview with Tyra [Banks], he hasn't -- he hasn't called, you know. And they just pretty much blew us off. So it's just getting worse.

King: Is there any chance the two of you could get together again?

Johnston: You know, I don't see that ever happening. I just hope that we can come to an understanding and become friends and raise this baby together.

King: We told the Palin camp that Levi Johnston would be our guest tonight and asked for a comment. We got this response today from Megan Stapleton, the Palin family spokesperson: "Bristol is focused on going to college, raising Tripp and advocating abstinence."

King: All right, Sherry, What do you make of all of this?

Sherry Johnston, Levi's mother: It's a whirlwind. I still haven't grasped my whole mind around all this.

King: Were you mad at the pregnancy, angry?

Sherry Johnston: No. No, I wasn't.

Sherry Johnston: He's talked about babies a lot since him and Bristol has been together. And he's always been playing with kids. And I've always wanted to be a grandma ever since mine grew up, so ...

King: What went wrong, do you think?

Sherry Johnston: I'm still trying to figure that out.

King: Do you think you might have been in the equation, Mercede, since Levi said that Bristol didn't like you?

Mercede Johnston, Levi's sister: I'm not too sure. I think it's a big part because of my friends. But I don't understand why.

King: What kind of friends?

Mercede Johnston: Friends that have previously dated my brother, they still talk. And there's kind of a jealousy issue between her and my friends.

King: Somebody is not letting your son see your grandson. You've got to go somewhere with that.

Sherry Johnston: Well, that's what we're all trying to find out, what to do.

King: Have you contacted them?

Sherry Johnston: Not personally. I have talked to Bristol, seeing if I could take Tripp, come over and get him, bring him to the house. But that hasn't happened.

Sherry Johnston: She said that she would call me back.

King: Do you have a guess as to why they're being this way?

Sherry Johnston: I don't know. Things started changing different, I would say, I noticed in November. Things were starting to chill down, not getting as friendly and I'm not sure [why]...

King: Now, he says you do have a lawyer?

Sherry Johnston: Yes, we do. We want to keep this on the lowdown and, you know, not start trouble. But, obviously, if things don't change, that's our next action when we get back ...

King: An e-mail question from Russell in Wilson, Oklahoma, "Levi, how much child support do you have to pay each month?"

Levi Johnston: I'm not doing any child support right now until we go to court. I have everything my boy needs back home: diapers, toys, everything.

King: Sherry, in December, shortly before Tripp's birth, you were arrested on drug charges, right? What is the status of that case?

Sherry Johnston: I can't go there right now. When I have my day in court, then I would love to be able to set the record straight. There's a lot of misconception out there, but I can't go any further than that right now.

King: And you're through with high school, right? Or aren't you?

Levi Johnston: No, I haven't taken my final test, no.

King: Are you going to do that?