WASHINGTON (CNN) -- The Supreme Court's conservative majority expressed varying degrees of concern Wednesday over a civil rights case brought by 20 firefighters, most of them white, who claim reverse discrimination in promotions. 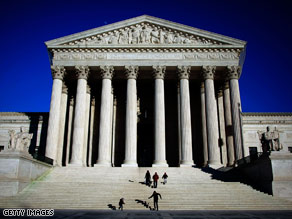 The suit was filed in response to New Haven, Connecticut, officials' decision to throw out results of promotional exams that they said left too few minorities qualified.

At issue is whether the city intentionally discriminated, in violation of both federal law and the Constitution's equal protection clause.

The high court is being asked to decide whether there is a continued need for special treatment for minorities, or whether enough progress has been made to make existing laws obsolete, especially in a political atmosphere where an African-American occupies the White House.

Watch why the plaintiffs are suing »

As is true in many hot-button social issues, Wednesday's arguments fell along familiar ideological lines, with most justices expressing clear views on when race considerations are proper to ensure a diverse workplace.

"It looked at the results and classified successful and unsuccessful applicants by race," said Justice Anthony Kennedy, head in hand. "And you (the city) want us to say this isn't race? I have trouble with this argument."

But a ruling against the city could leave New Haven officials stuck in a "damned-if-you-do, damned-if-you-don't" situation, subject to lawsuits from both minority and majority employees, said Justice David Souter. It is a situation business groups and municipalities have long expressed concern about.

Key plaintiff Frank Ricci and others took promotional exams in 2003 for lieutenant and captain positions that had become available in New Haven, Connecticut's second-largest city. The personnel department contracted with a private firm to design an oral and written exam. When the results came back, city lawyers expressed concern about the results because none of the black firefighters and only one Latino who took the exam would have been promoted.

The New Haven corporation counsel refused to certify the test and no promotions were given. The record does not indicate how many firefighters took the two tests for promotion to captain and lieutenant.

Watch why the lawsuit is so controversial »

But a group of firefighters sued, calling themselves the "New Haven 20." The plaintiffs, wearing their dress blue uniforms, posed on the high court steps after the 75-minute argument. Nineteen identify themselves as white while one says he is Hispanic-white.

Inside, conservatives on the high court questioned whether the city could throw out the results of the promotion exams after they were already given.

"You had some applicants who were winners and their promotion was set aside," said Justice Antonin Scalia.

Chief Justice John Roberts offered a hypothetical: "Jones, you don't get the promotion because you're white ... and they go down the list and throw out everybody who took the test. That would be all right," he asked. "They get do-overs until it comes out right. Or throw out this test, they do another test. Oh, it's just as bad, throw that one out."

Christopher Meade, arguing for New Haven, said, "The city has a duty to ensure that its process is fair for all applicants, both black and white."

Justices on the left seemed to support that view.

Justice John Paul Stevens suggested that if there were a choice of two tests, one of which had a lesser "disparate impact" on minorities, "they could take that test, even though its sole purpose was to achieve racial proportionality in candidates selected."

The firefighters' attorney, Greg Coleman, countered by saying the city's action in this instance "violates the principle of individual dignity."

Kennedy's views could prove key. He appeared to oppose the city's dismissal of the test results and has traditionally been skeptical of many race-based decisions in education and the workplace. But his more moderate views could blunt the impact of any ruling by his more right-leaning colleagues.

In a key ruling three years ago that tossed out racial diversity plans in two public school districts, Kennedy took a more centrist view that held open the limited use of skin color when trying to achieve diversity in the classroom.

The Obama administration also has taken a nuanced position on the appeal. A Justice Department lawyer told the high court that while the federal government supports the city's discretion to nullify the test results, it believes the lawsuit should be allowed to proceed on a limited basis.

The case has attracted a broad range of interest from a variety of advocacy and business groups concerned about how far the high court would go to allow race to be used at all by government and the private sector in such areas as affirmative action, education, and contracting.