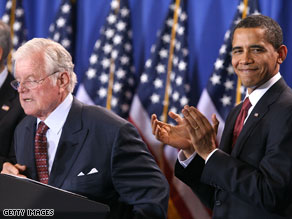 The Edward M. Kennedy Serve America Act, recently renamed to honor the Massachusetts senator's sponsorship of the measure, will more than triple the number of positions in the AmeriCorps program, from 75,000 to 250,000, by 2017.

"Our government can help to rebuild our economy ... [but] we need Americans willing to mentor our eager young children, or care for the sick, or ease the strains of deployment on our military families," Obama said.

"All that's required on your part is a willingness to make a difference. And that is, after all, the beauty of service. Anybody can do it."

Kennedy, his niece Caroline Kennedy, former President Bill Clinton, and former first lady Rosalynn Carter were in attendance when Obama signed the measure into law at a Washington-area school that encourages volunteerism as part of its curriculum.

The law creates four national service corps and launches several other initiatives, including, among other things, a "Summer of Service" program to spur greater community outreach by middle- and high-school students.

Older Americans will also be encouraged to volunteer more through the creation of a "Silver Scholars" program, under which individuals 55 and older who perform 350 hours of service receive a $1,000 award.

The law increases the existing AmeriCorps educational stipend offered to volunteers to $5,350 -- the same amount as the maximum Pell college grant.

Critics have contended the law is fiscally irresponsible in light of the economic downturn. They also argue that the concept of volunteerism is undermined by providing financial compensation for community service.

The law is expected to cost roughly $6 billion over the next five years.