WASHINGTON (CNN) -- President Obama said Tuesday that Iranian leader Mahmoud Ahmadinejad's recent characterization of the Israeli government as "racist" was part of a disappointing pattern that threatens to undermine the prospect of warmer relations between Washington and Tehran. 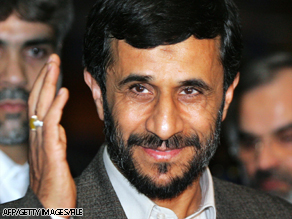 Mahmoud Ahmadinejad on called Israel a "totally racist government" during a U.N. conference on Monday.

"Sadly, [that kind of] rhetoric is not new," Obama said during a White House meeting with Jordan's King Abdullah.

"This is the kind of rhetoric that we've come to expect from President Ahmadinejad. ... Many of the statements that [he has] made, particularly those directed at Israel, [are] appalling and objectionable."

Obama said that Ahmadinejad's remarks were harmful "not just with respect to the possibility of U.S.-Iranian relations, but [to] Iran's position in the world."

Dozens of international envoys walked out during a speech by Ahmadinejad on Monday in which he accused Israel of having a "racist government" and committing genocide.

Speaking at a controversial U.N. anti-racism conference in Switzerland, the Iranian leader accused the West of making "an entire nation homeless under the pretext of Jewish suffering ... in order to establish a totally racist government in occupied Palestine."

"Iran is a very complicated country with a lot of different power centers," he said. "We will continue to pursue the possibility of improved relations and a resolution to some of the critical issues in which there have been differences, particularly around the nuclear issue."