(CNN) -- Inside the White House, the expectation was that the president's Latin American excursion would not be as much of a home run as his European economic summit. After all, he's less popular in that part of the world. 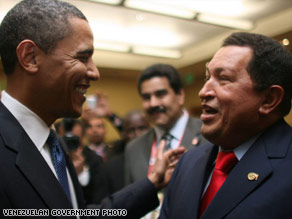 He had an enemy (can you say "Hugo Chavez"?) expected to grandstand to become a "frenemy." Chavez, the president of Venezuela, did not disappoint. In fact, he morphed into Zelig, looking to appear in every photo with the president, who seemed to oblige.

This is not a column about whether the president should take pictures with -- or shake the hands of -- unstable foreign leaders who mostly call him names and rant about America.

Sometimes, it's just unavoidable. A grimace instead of a smile on the face would be better, sure. But it's not the end of America's standing in the world, as some are suggesting.

But there is a problem, and it's not about photo ops. It's about finding the appropriate tonal response to leaders who say outrageous things about us and about our allies.

It's one thing to shake hands and speak of a willingness to engage; that's all good. No one wants to turn a tyrant's tirade into an obstacle to sitting down at a table to end the nuclear threat. No one wants to create a rhetorical cycle that escalates -- and ends any chance of constructive engagement.

At some point, however, looking away becomes a statement itself. Especially when outrage is completely justified -- and even preferable.

Case in point: When Iranian President Mahmoud Ahmadinejad used the podium at the United Nations conference in Geneva on Monday to call Israel a "cruel and repressive racist regime," we might have said something. The European delegates walked out of the conference (we declined to attend), but when asked about the brouhaha later, the State Department spokesman, sticking to the talking points, could only muster that "that type of rhetoric is not helpful and doesn't help facilitate a constructive dialogue."

Sure, the Iranian president has been a tad schizoid of late, indicating a mild willingness to help with the release of a jailed journalist, which could be taken as a sign of his interest in engaging with the United States.

But at some point, this turning-the-other-cheek policy can slap us in the face. By not responding, we can look tone-deaf.

All of which hands the president a political problem. Republicans have been hankering to exploit any sign of weakness from the new guy and get back on their own terra firma, national defense.

Former House Speaker Newt Gingrich, for example, was eager to fault Obama's performance as commander in chief during the pirate hostage standoff. Yet he and others were soon quieted when the brilliant marksmanship of three Navy SEALs won the day.

But the Summit of the Americas gave them an easy opportunity to decry the president's weakness, not only after his handshake with Chavez but also when he sat quietly through Nicaraguan President Daniel Ortega's 50-minute anti-American rant.

He didn't have to walk out, but he could have given a sharper critique of Ortega's histrionics after the event. Instead, he decided to just give it the back of his hand, saying only that "it was 50 minutes long."

Now, the Iranian president's tirade against Israel is another topic that will provide fodder for the disengagement foreign policy crowd.

So the chorus grows louder, led by former Vice President Dick Cheney. He blasts Obama for "cozying up" to Chavez, saying the president is "setting the wrong standard." He then makes the case that Obama is just naive for apologizing "profusely" overseas for America's past actions.

"The world outside there ... will be quick to take advantage of a situation if they think they're dealing with a weak president or one who is not going to stand up aggressively and defend America's interests."

Cheney, of course, is on a one-man jihad to set the record straight about the Bush administration. It's no secret he prefers cowboys to conciliators. And leaving aside how distasteful it is for a former vice president to accuse the current president of weakness, there is still a political problem brewing here for Obama: Sometimes, a dose of outrage and a flash of anger is warranted, even when you are on a mission to engage with the world.

In January, Obama managed to direct his outrage at those greedy Wall Street types who were taking taxpayer money and still paying themselves multimillion-dollar bonuses. He called their actions "shameful" and then asked them to "show some restraint and show some sense of responsibility" to the American people.

His anger was appropriate then, and it worked. Why not try some leaderly outrage now? It can't hurt. And maybe it will help keep Chavez out of every picture.

All About Barack Obama • Hugo Chavez