Commentary: Obama has to be more than the 'un-Bush'

Editor's note: Andrew J. Bacevich is professor of history and international relations at Boston University. A graduate of the U.S. Military Academy, he received his Ph. D. in American diplomatic history from Princeton. He is the author of "The New American Militarism: How Americans Are Seduced by War" (2005) and "The Limits of Power: The End of American Exceptionalism" (2008). 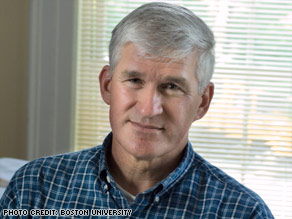 Andrew Bacevich says that ultimately, President Obama has to define his vision for foreign policy.

(CNN) -- At every stop during his recent trips abroad, President Obama went out of his way to assure observers that he is the un-Bush: a pragmatist rather than an ideologue, with both his feet firmly planted in the reality-based world.

To yesterday's untouchables, like Venezuela's Hugo Chavez, the cordial Obama offers smiles and handshakes. Although all to the good, this falls well short of being good enough.

Pragmatism devoid of principle provides an inadequate basis for coherent strategy. At the end of the day, there is no avoiding what the elder George Bush once called "the vision thing": a conception of how the world works, where it is headed and the role the United States should play in getting it there.

Obama's sympathetic nod to "soft power" and willingness to listen rather than preach do not qualify as that vision. Nor does his pledge to engage the Islamic world in respectful dialogue while working toward the abolition of nuclear weapons. They are at best markers that may suggest the outlines of something larger.

When it comes to national security, "changing the way Washington works" will require Obama to provide concrete answers to three distinct sets of questions.

First, what defines the current hierarchy of U.S. security interests? To what degree does that hierarchy take into account non-traditional or previously secondary concerns such as climate change, international organized crime and demography? Where does Islamic radicalism, George W. Bush's obsession, fall in that hierarchy? Absent clearly defined priorities, strategy inevitably takes a back seat to improvisation.

Second, with the United States today overstretched, debt-strapped and facing the prospect of prolonged economic distress, does the concept of "American global leadership" still retain any salience? If so, what exactly does that phrase mean? If the concept has become obsolete, what then defines the proper U.S. role in the international order?

Parting with old clichés (We're No. 1!) is never easy, yet clinging to them when they've outlived their usefulness fosters self-deception. Today we can no longer afford to indulge in delusions about ourselves or others. We need to see things as they really are.

Third, given the frustrations and failures of recent American wars, what exactly is it that we should look to our military to do? Does the Pentagon's sacred trinity of global presence, global power projection capabilities and global activism still make sense?

For his part, Secretary of Defense Robert Gates seems bent on reconfiguring the force to take on more challenges like Iraq and Afghanistan. Yet down that path lies the prospect of permanent conflict. Do we have a sufficient supply of soldiers, dollars or will to sustain such commitments?

Although neoconservatives and devotees of America as Indispensable Nation will howl, answering these questions with the honesty they deserve points toward the following:

• A definition of national interest in which the traditional great power competition is subordinated to the need to collaborate; against threats that transcend borders, going it alone is simply not an option.

• An approach to leadership that abandons fantasies of remaking the world in America's own image, striving to serve instead as an exemplar of a society nurturing genuinely liberal and humane values, a goal that will require urgent and sustained efforts to put our own house in order and to address long-neglected domestic problems.

• The rejection of post-Cold War illusions about the efficacy of military power, reaching their apotheosis in the Bush Doctrine of preventive war, and the return to classic "just war" thinking whereby war is permissible only for defensive purposes and as a last resort.

To base a strategic vision on such principles implies a radical transformation in the way Washington does business. That transformation would manifest itself in myriad ways: When it comes to claiming resources, agencies other than the Pentagon would move to the front of the line; the global footprint of the United States military would shrink; "soft power" would no longer serve as an afterthought.

For that very reason, individuals and institutions with a vested interest in the status quo would mount a fierce resistance. Obama would quickly learn that even the most popular president cannot impose his own vision by fiat. Instead, he will have to educate, cajole, negotiate, demand and expend precious political capital. Even then he will, at best, end up settling for half-a-loaf.

Yet should our pragmatic president choose the easier course of dodging "the vision thing" -- in effect, taking on whatever problem happens to crop up next -- he and the country will simply muddle along, one crisis following another in endless succession. The resulting strategic drift will not bode well either for his presidency or for the rest of us.

The opinions expressed in this commentary are solely those of Andrew Bacevich.