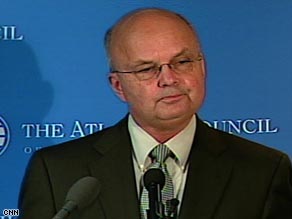 "What we have described for our enemies in the midst of a war are the outer limits that any American would ever go to in terms of interrogating an al Qaeda terrorist. That's very valuable information," Hayden said during an appearance on "Fox News Sunday."

"By taking [certain] techniques off the table, we have made it more difficult -- in a whole host of circumstances I can imagine -- for CIA officers to defend the nation," he said.

But Sens. Claire McCaskill, D-Missouri, and Lindsey Graham, R-South Carolina, said certain techniques should not have been allowed in the first place. McCaskill called them "a great recruitment tool for those who want to do harm to our country."

"One of the reasons the president was willing to let this information out was that already the information was out," he said on ABC's "This Week."

"Go get the New York Review of Books. It's there."

The memos said, among other things, that interrogation tactics such as waterboarding, sleep deprivation and slapping did not violate laws against torture absent the intent to cause severe pain.

Obama prohibited the use of so-called "enhanced interrogation techniques" such as waterboarding shortly after taking office in January.

Such techniques "undermine our moral authority and do not make us safer," he said Thursday, when the White House released the memos.

The Obama administration has said it won't pursue charges against CIA officers who used those tactics against prisoners in their custody. And Emanuel told ABC that the people who crafted the policy "should not be prosecuted either."

But in a sharply worded editorial Sunday, The New York Times called for the impeachment of Jay Bybee, a federal appeals court judge who was a Justice Department official when he wrote one of the memos that authorized those techniques.

"These memos make it clear that Mr. Bybee is unfit for a job that requires legal judgment and a respect for the Constitution," the newspaper editorialized. The memos "were written to provide legal immunity for acts that are clearly illegal, immoral and a violation of this country's most basic values," it stated.

Asked about that call on "Fox News Sunday," McCaskill said: "I think we have to look at it."

McCaskill, a member of the Senate's standing investigative subcommittee, said the Obama administration made the right decision by agreeing not to prosecute intelligence officers. But she added: "A lawyer that's responsible for this kind of advice that clearly went too far in terms of stretching what our law is -- it worries me that he's sitting on the federal bench right now."

Graham, however, said seeking to punish lawyers who advised the Bush administration "is a very bad precedent."

"I think it would be disaster to go back and try to prosecute a lawyer for giving legal advice that you disagreed with to a former president," said Graham, a member of the Senate Judiciary Committee and a lawyer in the Air Force reserve.

"The basic foundation of the legitimacy of the agency's action has shifted from some durability of law to a product of the American political process. That puts agency officers in a horrible position," he said.

"The really dangerous effect of this [decision] is that you'll have agency officers stepping back from the kinds of things that the nation expects them to do. ... You're going to have this agency -- on the front line of defending you in this current war -- playing back from the line," he said.

Hayden also said that, contrary to the assertions of many critics, the interrogation techniques in question had forced suspected terrorists to reveal valuable information and made the country safer.

He predicted that the release of the memos would be "just the beginning."

McCaskill told "Fox News Sunday" that the United States will be better off in the long run by clearly prohibiting interrogation techniques such as waterboarding.

And Graham said that while he was concerned that the release of the memos was a "huge tactical and strategic mistake done for political reasons," the decision to allow certain enhanced interrogation techniques was a mistake as well.

Graham added that he always thought waterboarding "was a procedure that would come back to haunt the country, and quite frankly it has."