Raúl Castro: Cuba ready 'to discuss everything' with U.S.

(CNN) -- The Cuban government, long the object of a U.S. economic blockade, is prepared to meet with the Obama administration, Cuba's leader said. 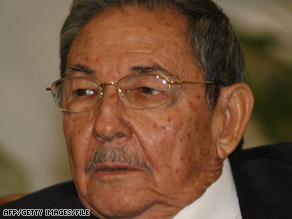 The response came days after President Obama lifted all restrictions on the ability of American citizens to visit relatives in Cuba as well as to send them remittances. Travel restrictions for Americans of non-Cuban descent will remain in place.

This week's move represents a significant shift in a U.S. policy that had remained largely unchanged for nearly half a century. The U.S. government instituted the embargo three years after Fidel Castro came to power in 1959.

In Mexico City for meetings with Mexican President Felipe Calderon, Obama offered a carrot and a stick to Havana.

Obama's gesture precedes a trip this week to Trinidad and Tobago for a key meeting of hemispheric powers -- the Summit of the Americas.

Watch how Obama likely will hear about Cuba at the summit »