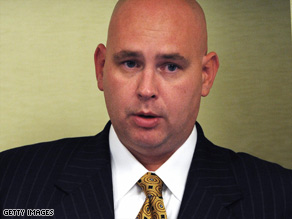 In a speech Friday to Log Cabin Republicans, a conservative gay rights group, Steve Schmidt said allowing same-sex marriage is in line with the conservative credo of keeping government out of people's private lives.

"There is a sound conservative argument to be made for same-sex marriage," Schmidt, who was McCain's campaign manager, told the group. "I believe conservatives, more than liberals, insist that rights come with responsibilities. No other exercise of one's liberty comes with greater responsibilities than marriage. In a marriage, two people are completely responsible to and for each other."

He added: "If you are not willing to accept and faithfully discharge those responsibilities, you shouldn't enter the state of matrimony, and it doesn't make a damn bit of difference if you're straight or gay. It is a responsibility like no other, which can and should make marriage an association between two human beings more fulfilling than any other."

Schmidt told CNN that the GOP must become more open if it wants to reverse a shrinking coalition, especially among younger, more accepting voters.

Watch more of Schmidt's take on the GOP »

"People are turned off in large measure by what they see as intolerance coming out of the party," he said.

Schmidt says he knows his is a minority view. In the presidential campaign, McCain ran against same-sex marriage.

"I don't honestly expect our party will reverse in the very near term its opposition to same sex marriage. Nor do I yet see support for it from a strong majority of the general public," Schmidt told the Log Cabin Republicans. "And, I do believe that such a highly charged political question such as this should be settled by the freely expressed will of the people, and not by the courts."

So what will change Republicans' mindset?

"One of the things that has definitely impacted my views on these issues and an evolution of thought over time is having a gay sibling," Schmidt told CNN. "As Americans get to know gay couples and or have gay family members, or work associates ... they come to understand that these relationships are deep and worth being respect and being protected."

Log Cabin Republicans say they hope other party leaders now realize that election losses prove the GOP catered too much to social conservatives.

"It's great that the Republican Party is going through this soul-searching at this moment right now," said Charles Moran, president of the Los Angeles chapter of the Log Cabin Republicans. "Republicans are thinking outside the box."

These days, their grassroots organization is reaching out to sympathetic Republicans in states debating same-sex marriage initiatives, such as New Hampshire.

Recently, Iowa and Vermont approved same-sex marriages. In April, the District of Columbia Council voted to allow same-sex marriages from around the country to be recognized there, though the measure still needs to be debated in Congress. All legislation in the district must pass congressional muster.

And just Thursday, New York Gov. David Paterson, a Democrat, said he plans to introduce a bill in the state Assembly to legalize same-sex marriage.

And this week, another Republican group -- GOProud -- formed to push a broader agenda, advocating traditional conservative issues such as low taxes and smaller government.

Gay Republicans say they often get asked a basic question: Why are you Republican? Most argue that they believe in the principle of limited government.

In fact, nearly 3 in 10 self-identified gays and lesbians voted Republican in the last presidential election, according to exit polling.

But while Schmidt admitted that it will be a tough challenge for the party to accept same-sex marriage, there could be hope down the road.

"I'm confident American public opinion will continue to move on the question toward majority support, and sooner or later the Republican Party will catch up to it," he told the gathering. "And I believe the nation's acceptance of same sex unions as lawful marriage would provide a far more secure guarantee that the change made to this profoundly important social institution will be permanent than would judicial fiat."

CNN's Evan Glass and Ed Hornick contributed to this report.