(CNN) -- President Obama visits Mexico with many issues on the table, but reinstating the ban on assault weapons in the U.S. isn't likely to be one on which the two countries can reach agreement. 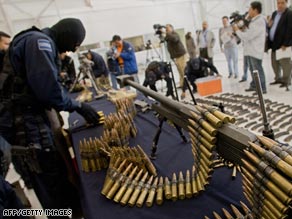 Mexican officials say criminals use assault weapons from the U.S. in the violent border region.

Mexican President Felipe Calderon and Arturo Sarukhan, Mexico's ambassador to the U.S., say reinstating the ban would stop the deadly flow of weapons across the border.

Under the Clinton administration in 1994, Congress banned possession of 19 military-style assault weapons. The ban was allowed to expire 10 years later during the Bush administration.

Earlier this year, U.S. Attorney General Eric Holder said that Obama would like to reinstitute the ban on the sale of assault weapons, noting, "I think that will have a positive impact in Mexico at a minimum." Secretary of State Hillary Clinton said last month that as a senator, she supported a measure to reinstate it.

Obama still supports reinstating the ban, as he did during the presidential campaign, but there are no plans to reintroduce it anytime soon, according to an administration official.

Obama thinks more can be done to stop the illegal flow of weapons to Mexico within existing laws, the official said, noting that the president has taken steps to deploy more law enforcement to curb the illegal flows of drugs, weapons and cash in both directions across the border.

The administration is unaware of any broad-based efforts in Congress to reinstate the ban, the official said.

Homeland Security Secretary Janet Napolitano told CBS on Thursday that reinstating the ban "simply is not part of the plan that we're talking about here."

The Obama administration says the U.S. shares responsibility for the situation in Mexico, but as far as the ban goes, "there's a lot on our plate," White House press secretary Robert Gibbs said.

Watch what's on the table for Obama's trip to Mexico »

Those who support the assault weapons ban as a way to curb violence cite figures from the Bureau of Alcohol, Tobacco, Firearms and Explosives that say American gun sellers supply the Mexican drug cartels with 95 percent to 100 percent of their guns.

But others say that claim cannot be substantiated -- and argue that less that 20 percent of weapons used in crimes in Mexico are traced to the U.S.

Wayne LaPierre, executive vice president and chief executive officer of the National Rifle Association of America, says U.S. rights are not the cause of Mexico's wrongs.

In a commentary on CNN.com, LaPierre wrote that to believe U.S. freedoms are fueling the violence "you have to believe these butchers and beheaders break every Mexican law they want except Mexican gun laws, which they honor -- while they break American gun laws."

"Everything Mexico's murderous thugs are doing is already illegal. At issue is not the absence of law, but the absence of political will to enforce the laws that both nations already possess," he wrote.

On the other side, however, there are those who say loopholes in America's gun laws fuel violence in both Mexico and the United States.

"We need to realize that the Mexican drug cartels are arming themselves here because our gun laws have loopholes so large that criminals and gun traffickers can easily drive gun-laden trucks through them," former Maryland Lt. Gov. Kathleen Kennedy Townsend, daughter of the late U.S. Sen. Robert F. Kennedy, wrote in a commentary for CNN.com.

"We need to prevent Mexican criminals and the traffickers who supply them from buying guns by changing our gun laws and strengthening U.S. law enforcement's ability to crack down on corrupt gun dealers."

On the eve of Obama's arrival, Calderon told ABC he thought the weapons ban was "very good legislation."

"During that period, we didn't suffer a lot, like we suffered in the four or five years," he said.

And Sarukhan told CBS this weekend, "There's a direct correlation between the expiration of the assault weapons ban and our seizures of assault weapons."

He said, "We cannot determine how Congress and the administration will move on this. What we will say is that this is one of the instruments by reinstating the ban that could have a profound impact on the number and the caliber of weapons going down to Mexico."

Obama was to meet Thursday with Calderon in Mexico City ahead of his trip to Trinidad and Tobago for the Summit of the Americas.

But Mexico isn't the only consideration when it comes to gun control. In the United States, gun control is a wedge issue -- and one that can carry serious political ramifications.

Democrats tend to shy away from remarks that could be interpreted as anti-gun, especially in swing states and districts. (Remember the frenzy that ensued after then-candidate Obama said people in small towns get bitter and "cling to guns or religion"?)

Democrats are usually thought of as the party more likely to enforce ownership restrictions, while Republicans are associated with ownership rights.

As a candidate, Obama promised, "I'm not going to take away your guns.'' Any other message would have been unpopular in the traditionally Republican states he won such as North Carolina and Virginia.

Other Democrats, such as Sens. Mark Warner and Jim Webb of Virginia, also are getting elected with the help of NRA supporters.

Even so, with a Democrat in the White House and a Democrat-controlled Congress, there's been a surge in requests for background checks of potential gun buyers, according to the FBI, and some gun owners say they think restrictions are somewhere on Obama's to-do list.

Asked Thursday if it's just too politically difficult now to reinstate the ban, Gibbs said, "I think the president believes that we can have a greater outcome in the short term working to enforce the laws that are on our books."