(CNN) -- Both the United States and France pulled off-high profile rescues in the waters off the Horn of Africa in the past week, killing a total of five pirates to free hostages who had been holed up for days. 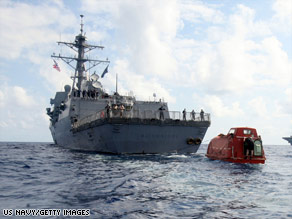 The USS Bainbridge tows the lifeboat in which Capt. Robert Phillips was held for days.

While those operations gained international attention, there have been dozens of attacks so far this year. Experts say it will take an international effort to combat the rising number of attacks.

"In our view, what France and the U.S. has done is exactly the right thing for a flag state to do, and if all flag states were to take that kind of robust action against the pirates we would not have the problems of Somali piracy to the extent that we have today," said Capt. Pottengal Mukundan, director of the piracy reporting center at the International Maritime Bureau.

Pirates also attacked a U.S. ship Tuesday night but didn't make it aboard. The pirates had fled the scene by the time the Navy arrived. In a separate incident hours later, the French Navy captured 11 suspected pirates off the coast of Kenya.

But securing the region is no easy task. The area involved off the coasts of Somalia and Kenya, including the Gulf of Aden, is more than 1.1 million square miles -- four times the size of the state of Texas.

At any given time, a number of nations could be in the region to protect the seas. While the countries try to coordinate efforts, there are limits to the extent of information they share.

In addition to the United States and the European Union nations, NATO, Russia, China and South Korea are among others patrolling the waters. Generally, more than a dozen ships in the region are working to counter piracy issues. Some countries also provide maritime air assets.

But even with that presence, the closest military ship could be days away from a merchant ship under attack, given the size of the region.

Following the Sunday rescue of Capt. Richard Phillips, who was freed after snipers killed three pirates, President Obama praised the efforts of the U.S. military and other departments involved, and vowed to halt the rise of piracy in the region.

"To achieve that goal, we're going to have to continue to work with our partners to prevent future attacks," Obama said.

Already this year, pirates have attacked at least 80 ships, according to the IMB. Of those, 19 were successful hijackings. In 2008, pirates attacked 111 boats and hijacked 42.

The U.S. military acknowledged Sunday that its actions to rescue Phillips could increase the risk of violence. The Navy is trying to beef up patrols in the area, but it has limited ships. The focus now will be to try to get more countries to put more of their ships into the effort.

"What we have seen in the last few months is the attacks being displaced towards the east coast of Somalia with its vast expanse of the Arabian Sea behind it, so it is a bigger challenge to monitor this part of the seas properly," Mukundan said.

Pentagon officials are looking at a variety of options for halting piracy, in conjunction with other departments like State and Justice that are looking at ways to help the Somali government and ways to try the pirates.

Shipping companies are unlikely to deter the pirates themselves, partly because of the financial burden. Last year, about 30,000 ships passed through the Gulf of Aden -- and there were 42 successful hijackings. In some situations, just paying ransom is still cheaper than outfitting ships with a private armed security team.

"There really is only one solution," said Ken Menkhaus, a former special adviser to the United Nations operation in Somalia. "It's going to take a government that sees piracy and ending piracy as a critical tool in improving their credibility in the eyes of the world."

Gortney said Monday that the piracy around the world "stems from activity where there is lawlessness, lack of governance, economic instability; things of that nature. And wherever you have that, you're going to have criminal activity at sea."

Ethiopia invaded Somalia in December 2006 to prop up a U.N.-backed transitional government in Mogadishu after a hard-line Islamist group overtook the capital and seized power. Earlier this year, Ethiopia withdrew all of its troops.

Efforts to replace the Ethiopians with an African Union-led peacekeeping mission faltered as the violence worsened. The lawlessness also spilled onto the seas off the Horn of Africa, where the international vessels are routinely hijacked by pirates, suspected to be Somali.

A U.N. resolution gives the United States the authority to conduct operations inside Somalia, but the memories of an unsuccessful effort in 1993 are reason enough for some to stay out of the region.

Seventeen years ago, Somali militiamen shot down a U.S. Black Hawk helicopter during a failed U.S. attempt to capture a warlord. The images of American troops being dragged through the streets led to the withdrawal of U.N. forces and years of anarchy in Somalia.

Recalling what came to be known as "Black Hawk Down," CNN Senior Political Analyst Gloria Borger said a lot of people in the Obama administration are likely to be skeptical about becoming deeply involved in the region.

"Everybody knows the area," she said. "They're just very reluctant to start going down that path again, particularly given the fact that we're already fighting two wars in Iraq and Afghanistan."

But, she said, something will have to be done, because "the status quo is completely unacceptable."

"That may mean more Navy ships. It may mean different routes for Navy ships. We're not sure. But, you know, they have got about a million square miles of water there that they have to police. And it's just not an easy thing to do. And, as the president said, it can't be unilateral. We have to do it with other countries," she said.

Kim Petersen, president of TranSystems Security, agreed that a coalition approach is necessary, but disagreed with the comparison to 1993.

"We have the resources available to us in the region already in order to escalate a new policy there where we actually take the fight to the pirates," he said.

"What we really need to do now is address what the real threat is here," he said, arguing that it's not just a threat to people and the supply chain. "It's also the likelihood, or at least the possibility, that organizations like Al-Shabaab, which is al Qaeda in Somalia, are going to subsume the piracy trade, because we've done such a good job of depriving them of their revenues through electronic banking controls ... They're looking for revenues, and this is a great business model for them."