WASHINGTON (CNN) -- The Department of Homeland Security will never monitor ideology or political beliefs, the head of the agency said Wednesday, responding to criticism of a recent report on right-wing extremist groups. 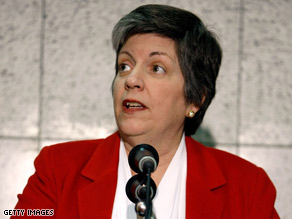 "Let me be very clear: We monitor the risks of violent extremism taking root here in the United States," Homeland Security Secretary Janet Napolitano said in a written statement.

"We don't have the luxury of focusing our efforts on one group; we must protect the country from terrorism whether foreign or homegrown and regardless of the ideology that motivates its violence."

The report, "Right-wing Extremism: Current Economic and Political Climate Fueling Resurgence in Radicalization and Recruitment," said right-wing extremist groups may be using the recession and the election of the nation's first African-American president to recruit members.

The report, which was prepared in coordination with the FBI, was published last week. It was distributed to federal, state and local law enforcement officials. Mainstream media picked up the story after it was reported by conservative bloggers.

The report compared the current climate with that of the 1990s, saying a recession, criticism over outsourcing of jobs and a perceived threat to U.S. power at that time fueled a resurgence of right-wing extremism.

"The willingness of a small percentage of military personnel to join extremist groups during the 1990s because they were disgruntled, disillusioned or suffering from the psychological effects of war is being replicated today," the report said. It noted that Timothy McVeigh, the bomber of the Oklahoma City federal building in 1995, was a military veteran.

"You have a report from Janet Napolitano and Barack Obama, Department of Homeland Security portraying standard, ordinary, everyday conservatives as posing a bigger threat to this country than al Qaeda terrorists or genuine enemies of this country like Kim Jong Il," he said, referring to the leader of North Korea.

"Illegal aliens, the increasing power of the federal government, gun grabs, abortion and the loss of U.S. national sovereignty. In other words, anyone who is worried about preserving our borders, language and culture is on Big Sis' watch list."

In her Wednesday statement, Napolitano said the agency is on "the lookout for criminal and terrorist activity but we do not -- nor will we ever -- monitor ideology or political beliefs."

She said she was briefed on the general topic, which "struck a nerve as someone personally involved in the Timothy McVeigh prosecution."

Napolitano said she intends to meet with American Legion National Commander David K. Rehbein, who sent her a letter Monday stating his concern about the report.

"Timothy McVeigh was only one of more than 42 million veterans who have worn this nation's uniform during wartime," he wrote. "To continue to use McVeigh as an example of the stereotypical 'disgruntled military veteran' is as unfair as using Osama bin Laden as the sole example of Islam."

He added, "I think it is important for all of us to remember that Americans are not the enemy. The terrorists are."

Napolitano said in her statement that she will tell Rehbein that the Department of Homeland Security honors veterans and employs thousands, including Deputy Secretary Jane Holl Lute.

The Obama administration in January issued a warning about left-wing extremists. Both reports were initiated during the administration of President George W. Bush.