WASHINGTON (CNN) -- Bo the Portuguese water dog made his White House debut under cloudy skies Tuesday afternoon, spending several minutes taking his new family on a lively romp over the South Lawn with frequent stops for hearty sniffs at his new surroundings. 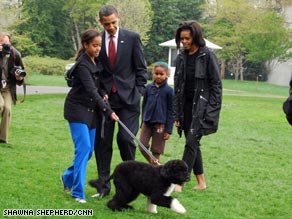 Bo landed on all four feet at his fourth home in his six short months of life, fulfilling President Obama's campaign promise to get his daughters a dog in return for all the time he spent on the road during the long presidential fight.

"He's a star. He's got star quality," the president said of the black curly pup with white front feet and chest and a lion-cut tail.

The Obamas ended up with a purebred dog, despite the president's preference for a mutt, largely because of 10-year-old Malia's allergies -- Portuguese water dogs don't shed -- and because of opportunity.

Bo didn't fit in well with his first owners and was returned to the breeder in March. That breeder happened to be the breeder of Sen. Ted Kennedy's Portuguese water dogs, and when Kennedy learned the puppy was available, he arranged to offer him to the Obamas.

Bo spent a month with Kennedy's trainer before coming to the White House for an initial visit over the weekend and for his official welcome Tuesday.

"Dog Whisperer" Cesar Millan said on Tuesday afternoon that Portuguese water dogs are an active breed and will need long walks and will need to understand quickly who is the "pack leader."

"Very important everybody plays the leadership role -- the girls, Ms. Michelle, obviously, the president," he said. "Everybody has to learn to walk the dog, to master the walk."

The Obamas, Millan said, have an opportunity to model good behavior for dog owners.

"This is definitely the most popular dog in the world right now," he said. "This is why it's very important for everybody -- all the Obama family -- to practice the exercise, the discipline and affection."

While out with his family and the dog Tuesday afternoon, Obama said Bo had "a bunch of possibilities" of where to sleep, but his own bed wasn't one of those. Bo will be allowed into the Oval Office, he said, and the family will take turns with walks.

The president and his family also shared some of their newfound knowledge about Portuguese water dogs.

"The only concern we have is that apparently, Portuguese water dogs like tomatoes. Michelle's garden is in danger," he said.

"We don't have tomatoes," the first lady said. "Not yet," Obama reminded.

"He doesn't know how to swim," chimed in 7-year-old Sasha.

"Apparently they have to be taught how to swim," the president said. "They have webbed feet. And they herd fish for the fishermen in Portugal. That is what we've heard."