WASHINGTON (CNN) -- The nation's chief counterterrorism official says despite a "seriously diminished" threat to the homeland, the U.S. government is still not properly organized to support the "team" effort needed to defeat al Qaeda. 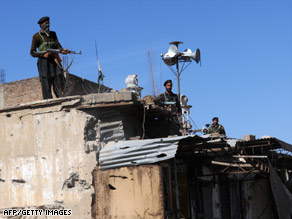 Mike Leiter, the director of the National Counterterrorism Center, said the government has made vast improvements since the terrorist attacks of Sept. 11, 2001, but budgets, plans, programs and personnel are still set up along individual departments and agencies.

"This is a team sport, but the structures are not organized to support the team," explained Leiter.

Leiter discussed the current state of al Qaeda, and future threats, during a conference Thursday at the Aspen Institute, a nonpartisan think tank in Washington.

The threat al Qaeda poses to the United States homeland from its safe haven along the Pakistan-Afghanistan border has "seriously diminished" over the past year, according to Leiter. But in its base region, the local threat from al Qaeda "is probably as bad as we have ever seen."

The recent attack against a police facility in Lahore, Pakistan, was cited by Leiter as an example of how militant groups in the region have aligned themselves with al Qaeda to try and undermine the stability of the weak Pakistani government. Some of those groups have also launched attacks against U.S. and coalition forces operating out of Afghanistan.

The director reiterated the often-stated concern that Pakistan wasn't doing enough to help the situation.

"There are many times the U.S. government wished the Pakistani government -- intelligence and military services -- had the greater willingness and capability to do some of the things we think need to be done," said Leiter.

Leiter attributed the reduced threat to the U.S. homeland to a series of successful actions taken by the United States.

Over the past year, the CIA has launched missile strikes from unmanned planes against suspected terrorists operating out of the ungoverned regions of Pakistan.

According the counterterrorism chief, the ability of al Qaeda leadership to train and deploy crews to attack the U.S. has diminished.

"Al Qaeda and its ability to project threats to Western Europe and the U.S. is much lower than it was last year and lower than it has been for some time," he said, but he warned, "lower does not mean the threat is not alive."

Leiter expressed concerned about the resurgence of al Qaeda in the Arabian peninsula in the past six to 12 months. He cited the increasing number of attacks by terrorists in Yemen and the growing influence of al Qaeda and the Islamist group al Shahab in Somalia.

The Mumbai, India, attacks late last year, where a group of terrorists used more conventional means to attack multiple locations, showed a change of tactics and raised the question of how the terrorist threat might manifest itself in the future. Leiter said the focus has been on suicide bombers, but, "Mumbai reminds us that old-school tactics like AK 47s (rifles) can be effective."

Should the United States continue to refer to the efforts against jihadists as the war against terrorism? That's what the Bush administration called it, but many in the Obama administration have been reluctant to do so.

Leiter said there has been an evolution of understanding about terrorism. Immediately after 9/11, he said, it was impossible to think of this in terms other than a war.

The battle against terrorists in Pakistan and Afghanistan could still be considered a war, but Leiter said the terminology can be counterproductive. He referred to it as a campaign against terror.