WASHINGTON (CNN) -- Vice President Joe Biden brushed aside recent criticism by predecessor Dick Cheney that moves by the Obama administration had put the United States at risk, telling CNN on Tuesday that the former vice president was "dead wrong." 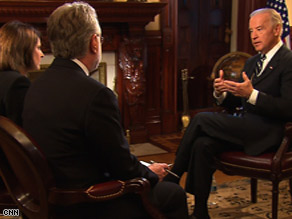 Vice President Joe Biden sits down for an interview with CNN's Gloria Borger and Wolf Blitzer on Tuesday.

"I don't think [Cheney] is out of line, but he is dead wrong," he told CNN's Wolf Blitzer. "This administration -- the last administration left us in a weaker posture than we've been any time since World War II: less regarded in the world, stretched more thinly than we ever have been in the past, two wars under way, virtually no respect in entire parts of the world.

"... I guarantee you we are safer today, our interests are more secure today than they were any time during the eight years" of the Bush administration.

In an interview with CNN's John King last month, Cheney said President Obama had been "making some choices that in my mind will raise the risk to the American people of another attack."

Biden said former President Bush had not been fully aware of the country's position in the world.

Watch Biden lash out on Bush and Cheney »

"I remember President Bush saying to me one time in the Oval Office, and he was a great guy, enjoyed being with him. He said to me, he said, 'Well, Joe,' he said, 'I'm a leader.' And I said, 'Mr. President, turn around and look behind you. No one's following.' People are beginning to follow the United States again as a consequence of our administration."

"... I think the biggest thing we're doing is, I'm operating in concert with the president," he said. "There are not -- there are -- look, everybody talks about how powerful Cheney was. His power weakened America, in my view."

But he did not deny reports of disagreement within the Obama administration as well, over the president's plan to widen involvement in Afghanistan. A report last week said Biden had warned about the possibility of getting into a quagmire, while military advisers pushed for more troops.

The vice president said that he condemned a new Afghan law that would allow men to rape their wives, but that those issues were not the focus of the U.S. presence in that nation. "I am not prepared to send American troops to die for that," he said.

As the president made an unannounced visit to Baghdad, Iraq, on Tuesday, Biden said that he had no concerns that a recent uptick in violence in Iraq might affect plans to withdraw most U.S. troops from that country by the summer of 2010.

"I'm not worried about that at all. We will draw down along the timeline we suggested," the vice president said.

Also not a concern for Biden: the possibility of an Israeli strike on Iran's nuclear facilities. The vice president said he was not worried that Israel's new government, under Prime Minister Benjamin Netanyahu, would order such an attack.

"I don't believe that Prime Minister Netanyahu would do that. I think he would be ill-advised to do that. And so my level of concern is no different than it was a year ago."

A day after North Korea's rocket test sparked alarm from world leaders, Biden called for a tougher response from Moscow and Beijing.

"What I'd like to see is a strong condemnation and a united effort on the part of the Chinese, Russians in the six-party talks to say, 'enough is enough, there will be greater sanctions, we will squeeze down even harder on North Korea,' " he said.

He added that China could "do a great deal more," although he was uncertain it would. "I think this puts the onus on China and Russia and South Korea and Japan, et cetera, along with us, to be bolder in our condemnation."

On the domestic front, Biden said that the administration's economic plan would prevent up to 4 million jobs from being lost and stabilize the economy, but that "it will take at least another year before you start to see employment," and in the meantime, jobs will continue to disappear.

"There will be an additional job loss. ... You're not going to see reports this calendar year saying there was no job loss this month. That is not going to happen. ...There will continue to be job losses the remainder of this year. The question is will they continually go down before they begin to rebound, and employment -- we go down to zero job loss and back to employment."

He said it was "too premature" to begin discussing another stimulus package, though he has not ruled one out.

All About Joseph Biden • Dick Cheney