(CNN) -- Hold on to the audacity of hope but shun the arrogance of over-promising. 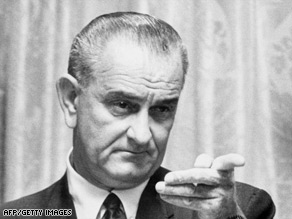 That's the message from a scholar who says President Obama can learn much from the success and mistakes of another ambitious attempt to remake America.

Robert Weisbrot, co-author of "The Liberal Hour: Washington and the Politics of Change in the 1960s,'' says the Great Society revolution was "tremendously liberating" for members of the most vulnerable groups in America.

The Great Society was President Lyndon Johnson's sprawling legislative attempts in the mid-1960s to lift Americans out of poverty, erase racial injustice and clean up the environment.

But historical circumstances won't permit Obama to push through his own Great Society, Weisbrot says.

"Obama is living in a different age," Weisbrot said. "The circumstances won't permit him to be another Lyndon Johnson."

Obama came to office with the nation's economic institutions verging on collapse. He also has to contend with bitter partisanship and a public that's suspicious of big government programs.

"Obama needs to not only learn lessons from the Great Society but keep in mind the limits of what he can draw from a fundamentally different age," Weisbrot said.

Americans were ready for the Great Society when Johnson became president, he says.

The country was enjoying a post-World War II economic boom. The Republican and Democratic parties worked together because both had a significant number of moderates. And people had more faith in the federal government, which had led the nation out of the Great Depression and World War II and helped rebuild the European economy, Weisbrot says.

"For many Americans, the federal government could achieve anything for which there was a national mandate," Weisbrot said.

He says Johnson framed the Great Society as a war to defeat poverty and racial injustice. He over-promised, particularly when the Vietnam War began to drain away resources for the Great Society.

"Lyndon Johnson dealt in hyperbole," Weisbrot said. "It works well in getting legislation through Congress, but it sets the nation up for disillusionment when the promised Utopia didn't materialize."

All About Barack Obama • Lyndon Johnson