Military mortuary open to media for first time since 1991

WASHINGTON (CNN) -- For the first time since media coverage was banned in 1991, the return of the body of a fallen member of the U.S. armed forces was opened to news outlets late Sunday. 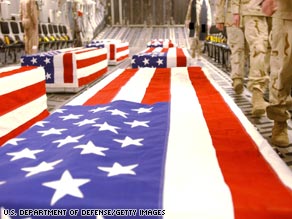 A transport plane carries caskets of U.S. servicemen in this photo the Pentagon released in 2005.

The U.S. Air Force informed media on Sunday that the family of Staff Sgt. Phillip Myers consented to allowing coverage of his casket being returned to Dover Air Force Base in Delaware.

Myers, 30, of Hopewell, Virginia, was a member of an engineering unit based in Britain.

He died Saturday in a roadside bombing in southern Afghanistan, the U.S. military reported.

In February, President Obama and Defense Secretary Robert Gates overturned a policy that dated back to the first Persian Gulf war.

They agreed to allow reporters to observe the remains of American troops being returned to the U.S. military mortuary at Dover, as long as families agreed.

The policy was supposed to take effect on Monday, and no reason was given why reporters were allowed to view the proceedings on Sunday.

Watch report on lifting of the ban »

All About Dover Air Force Base • Delaware • Robert Gates • Media