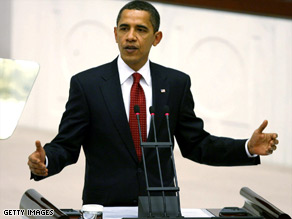 But the officials strongly cautioned that American presidents are frequent targets of threats that are all watched very carefully, and in this case the alleged plotter did not appear to get anywhere close to Obama during his European tour.

The officials also noted that while Obama gets more threats than usual as the first African-American U.S. president, this particular threat did not force any change to his schedule.

"Life goes on," said one of the officials familiar with the matter, who suggested the threat may be getting more attention because there has been a heavy international focus on Obama's first overseas trip since taking office.

White House officials declined to comment on the matter, citing a policy of not talking about security and threats around the president. U.S. Secret Service officials spoke only briefly about the case.

"We work closely with the host country whenever there is an arrest, which we are doing in this matter," Secret Service spokesman Ed Donovan said.

The plot was first reported by the Saudi Arabian newspaper al-Watan, which revealed that Turkish security services arrested a man of Syrian origins Friday in connection with a plan to kill Obama during his visit to Turkey. Obama was in Strasbourg, France, on Friday for a NATO summit and did not arrive in Turkey for the final leg of his trip until Sunday.

The Saudi paper reported the suspect, who was carrying an Al-Jazeera TV press credential in the name of "M.G.," confessed to authorities after his arrest that he and three alleged accomplices plotted to stab Obama with a knife during the Alliance of Civilizations Summit in Istanbul, which Obama attended on Monday evening. The U.S. officials confirmed those allegations, but stressed to CNN that the information provided by the man is still being verified.

Al-Jazeera's bureau chief in Ankara, Turkey, Yucef al-Sharif, told the newspaper his news organization knew nothing about the man and suggested he may have obtained a forged press credential. According to U.S. officials, it's unclear whether the man, a permanent resident of Istanbul, had obtained a real press credential.

On Sunday, U.S. and international journalists covering Obama's trip did face more extensive searches of their baggage than usual by the U.S. Secret Service before boarding a press charter flight from the Prague, Czech Republic, region to Ankara. The same extensive searches were conducted Monday before a flight from Ankara to Istanbul.

But U.S. officials downplayed the possibility the more extensive searches were done out of concern that plotters may have infiltrated the media. Instead, the officials suggested that since Turkish security officials had not necessarily handled such a large crush of media before, U.S. Secret Service officials simply wanted to go the extra mile in their searches.

All About Barack Obama • Turkey • Istanbul