(CNN) -- Tom Braden, the creator and co-host of CNN's "Crossfire," which pioneered the talk-show format that pitted a conservative against a liberal, died Friday at age 92. 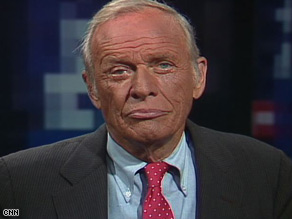 Tom Braden died Friday at age 92 of natural causes at his home in Denver, Colorado.

Daughter Susan Braden said he died of natural causes at his home in Denver, Colorado.

In 1982, Braden took "Crossfire" to CNN from a local station in Washington and served as the program's host "from the left" until 1989.

"Many people believe that Tom created the genre of political talk shows and debate programs that has now been copied and copied and copied," said Sam Feist, CNN's political director and senior executive producer of political programming. "He was a giant of a man and one of the most decent human beings you'd ever want to meet. CNN was a better place because Tom Braden worked here."

Born in Greene, Iowa, Braden graduated from Dartmouth in spring 1940, when the Germans overran France. He volunteered to join the British army, said his good friend and conservative sparring partner, Pat Buchanan.

After fighting in the African desert, Braden joined the U.S. Office of Strategic Services when the United States joined the fight, then joined the CIA, Buchanan said.

Braden tried his hand at politics, running for lieutenant governor of California in 1966, when he lost in a Democratic primary.

He and Bobby Kennedy "were real buddies," Buchanan said.

Braden decided to become a journalist at the suggestion of the poet Robert Frost, Susan Braden said.

In 1975, he wrote the best-selling book, "Eight is Enough," about his eight children, which was made into a television sitcom that starred a crusty political columnist named Tom Bradford.

In 1977, he was co-hosting a Washington radio show called "Confrontation," a format that caught on quickly, Buchanan said.

"We took over afternoon drive," the former GOP presidential candidate said. "Braden and I would interrogate people, and we'd go at it 'til all hours."

"He was a cantankerous character," Buchanan said. "He really didn't like conservatives, especially the new breed. It made for great chemistry and opposition."

But the dislike didn't get personal. "He would laugh at something that was at his expense if it was a good line. That's what you need in the show. An appreciation if the other guy scores a good point."

Once, they both found themselves interviewing a man representing the Ku Klux Klan. "He had on his hat and everything and he was sitting there with his arms folded," said Buchanan, who introduced the guest to the audience.

"So Tom Braden starts off and says, 'What the hell are you doing in this getup?'

"The guy said, 'Your producer told me to wear it.' It was ratings month. It was like that in the early days. It was wild, crazy stuff. But the ratings were tremendous."

So good that, after six months, the duo's show was moved up to 7:30 p.m., a half-hour after they finished their three-hour radio show, he said.

"We'd get in our cars, race to CNN, put powder on our faces, sit in the chair and start going after somebody," he said.

Braden stuck to his guns, Buchanan said, citing an interview with Cal Thomas, the columnist. "Cal accused him of writing, I think, for a pornographic magazine, and Braden hadn't written for them, but had been interviewed by them.

"Braden says, 'You're going to apologize to me or I'm walking off the show.' And Cal didn't apologize, and Braden walked off his own show. It was a very funny moment.

"I immediately said, 'We're going to have to go to break here.' "

After the break, Braden returned. "Fortunately, it was taped," Buchanan said.

"It was the most important part of his life," Susan Braden said of her father's years at CNN. "It was his life, it was what he did. He was a part of something, the beginning of something."

She said that, despite their philosophical differences, "he and Pat Buchanan actually liked each other."

Braden left the show in 1989. "I think he left because CNN thought it was time for a change and to bring in a newer, younger adversary," Buchanan said. "The truth is, I opposed Tom's leaving at the time."

Funeral arrangements had not been made Friday, but Braden is to be buried in Dubuque, Iowa, Susan Braden said.

All About Patrick Buchanan