STRASBOURG, France (CNN) -- President Obama on Friday called on Europe and the United States to drop negative attitudes toward each other and said "unprecedented coordination" is needed to confront the global economic crisis. 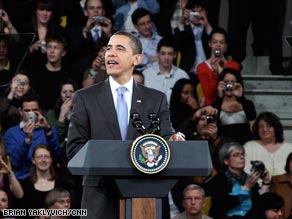 Speaking at a packed town hall meeting in Strasbourg on his first overseas trip as president, Obama said, "I'm confident that we can meet any challenge as long as we are together."

It's easier to allow "resentments to fester" than "to forge true partnerships," the president said. "So we must be honest with ourselves. In recent years, we've allowed our alliance to drift. I know that there have been honest disagreements over policy. But we also know that there's something more that has crept into our relationship.

"In America, there's a failure to appreciate Europe's leading role in the world. Instead of celebrating your dynamic union and seeking to partner with you to meet common challenges, there have been times where America's showed arrogance and been dismissive, even derisive.

"But in Europe, there is an anti-Americanism that is at once casual but can also be insidious. Instead of recognizing the good that America so often does in the world, there have been times where Europeans choose to blame America for much of what's bad.

"On both sides of the Atlantic, these attitudes have become all too common. They are not wise; they do not represent the truth. They threaten to widen the divide across the Atlantic and leave us both more isolated."

Obama's comments came after the G-20 meeting in London, England -- which Obama called "a success" of "nations coming together, working out their differences, and moving boldly forward" -- and on the eve of a NATO summit in Strasbourg marking that organization's 60th anniversary.

"I've come to Europe this week to renew our partnership -- one in which America listens and learns from our friends and allies, but where our friends and allies bear their share of the burden," he said at the town hall meeting. "Together, we must forge common solutions to our common problems.

"So let me say this as clearly as I can: America is changing. But it cannot be America alone that changes."

All About Barack Obama • NATO