Commentary: Budget a 'clear and present danger' to our kids

By Judd Gregg
Special to CNN

Editor's note: U.S. Sen. Judd Gregg, the ranking Republican on the Senate Budget Committee, represents New Hampshire. He withdrew his nomination for Commerce Secretary in the Obama administration in February. 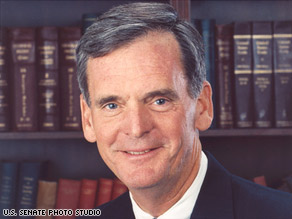 Sen. Judd Gregg says the president's budget could saddle the next generation with too much debt.

WASHINGTON (CNN) -- Throughout our history, each generation made sacrifices to better the lives of the next generation. Part of the American dream has included passing on to your children hope for the future and the possibility of prosperity.

Yet, as Americans watch their jobs, savings and quality of life diminish during this very real and very serious economic downturn, many wonder: What will the future bring?

I understand their concerns -- times are tough -- but we are a strong and resilient nation, capable of recovering from this recession. Families, businesses and communities across the country are looking to Washington, Congress and the White House to steer the country toward a path of recovery and financial strength for the long term.

However, the blueprint for our nation's future, the president's budget, which was passed largely intact by Congress Thursday, does not offer a prescription for long-term growth and prosperity. Rather, by spending too much, taxing too much, and borrowing too much, it represents a clear and present danger to the financial health of our nation and to the financial security of our children.

To put it into perspective, the president's budget would double the national debt in five years, increasing it from last year's $5.8 trillion to $11.7 trillion in 2013, and would almost triple the debt in 10 years, according to estimates by the Congressional Budget Office. At the end of the president's budget, an average household in this country will owe $130,000 in debt just to support the government.

The burden of this debt will be borne by our children, and they will bear the cost of this through a dollar that is diminished in value or through higher taxes. So the money they might use to send their children to college, or buy a house, or live a better lifestyle will be eliminated or significantly reduced.

It is true that the current state of the economy is stark, and the simple fact remains the president has inherited a substantial and significant economic challenge. Spending is needed in the short term to stabilize our financial systems and help our economy recover. But the recession will not last forever, and our budget should not spend as if it will.

The president's proposal adds, on average, almost $1 trillion a year to the debt to dramatically increase the size of the government. This rate of spending is not sustainable and this course of action will put our country on the road to bankruptcy.

As families sit at their kitchen tables to assess their own budgets and priorities, they know they will have to make hard choices about how they spend their money and what they sacrifice to grow their savings. Yet the president's budget neglects to make its own hard choices. It has zero savings for major entitlement programs which are on track to cost the nation more than $67 trillion in the next 75 years.

Along with massive hikes in spending, this budget also implements the largest tax increase in U.S. history -- $1.5 trillion in new taxes over the next 10 years. For small business people, taxes are going to go up dramatically as a result of this budget; high-income people who donate to charity will face higher taxes, a change which will likely reduce charitable contributions; and anyone who turns on their lights in the morning will face higher taxes.

If the president gets what he wants in his cap and trade proposal, everybody who pays an electric bill or other energy bills will pay an average of $3,000 more in taxes a year for their energy needs. Yet none of these taxes will go to reduce the deficit. Instead, they will go to ramp up the size of government.

As a nation, we have always passed on to our children a better, stronger, more prosperous nation. Yet, the numbers put in front of us through this budget proposal do not lie -- this budget takes us off that path and puts us into new and dangerous territory.

If we continue on this course of increased spending, annual deficits of $1 trillion, and zero restraint spending, we may be the first generation to pass on to our children a country they cannot afford. Our goal and our shared responsibility must be to pass on the same opportunity for growth and prosperity to the next generation that our generation received.

The opinions expressed in this commentary are solely those of U.S. Sen. Judd Gregg.