(CNN) -- U.S. President Obama and Russian President Dmitry Medvedev announced Wednesday that their countries will soon begin negotiations on reducing their nuclear arsenals, according to a joint statement from the two leaders. 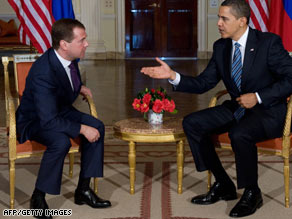 Russian President Dmitry Medvedev and President Obama talk Wednesday in London ahead of the G-20.

The announcement came after Obama and Medvedev met in London ahead of Thursday's G-20 summit.

The statement said the two leaders agreed that the Strategic Arms Reduction Treaty on the Reduction and Limitation of Strategic Offensive Arms -- which expires in December -- "has completely fulfilled its intended purpose and that the maximum levels for strategic offensive arms recorded in the treaty were reached long ago."

"They have therefore decided to move further along the path of reducing and limiting strategic offensive arms in accordance with U.S. and Russian obligations under Article VI of the Treaty on the Non-Proliferation of Nuclear Weapons," the joint statement said.

Negotiators from both countries will soon begin talks "to work out a new, comprehensive, legally binding agreement on reducing and limiting strategic offensive arms to replace the START Treaty," the statement said.

Earlier, two senior Obama administration officials said another goal of the president's meeting with Medvedev was to set a date for a U.S.-Russian summit in Moscow, Russia, this summer.

The joint statement said negotiators from both countries would report their progress on working out the new nuclear arsenal reduction agreement by July.

"The new agreement will mutually enhance the security of the parties and predictability and stability in strategic offensive forces, and will include effective verification measures drawn from the experience of the parties in implementing the START Treaty," the statement said.

In a joint news conference Wednesday with British Prime Minister Gordon Brown -- ahead of his talks with Medvedev -- Obama emphasized that Russia and the United States also have a common interest in "reducing nuclear stockpiles and promoting nuclear non-proliferation" across the world.

"One of the things I have always believed strongly is that both the United States and Russia and other nuclear powers will be in a much stronger position to strengthen what has become a somewhat fragile thread-bare nonproliferation treaty if we are leading by example and if we can take serious steps to reduce the nuclear arsenal," Obama said.

"I think people on both sides of the Atlantic understand that as much as the constant cloud, the threat of nuclear warfare has receded since the Cold War, that the presence of these deadly weapons, their proliferation, the possibility of them finding their way into the hands of terrorists, continues to be the gravest threat to humanity. What better project to start off than seeing if we can make progress on that front. I think we can."

The U.S. president said there's been a rift in the past several years in the U.S.-Russian relationship.

"There are very real differences between the United States and Russia, and I have no interest in papering those over. But there are also a broad set of common interests that we can pursue" and "great potential for concerted action," Obama said.

Watch how U.S. and Russia plan to reset relations »

The two agreed to set up a high-level strategic and economic dialogue chaired by Cabinet-level representatives -- Secretary of State Hillary Clinton and Secretary of the Treasury Timothy Geithner for the United States, and State Councilor Dai Bingguo and Vice Premier Wang Qishan for China.

Obama and Hu appear to have deferred the question of human rights, one of the greatest points of friction between the two sides. "The two sides agreed to resume the human rights dialogue as soon as possible," the White House statement said. China did not immediately confirm the details of the U.S. announcement.