WASHINGTON (CNN) -- More than eight out of 10 Americans think Barack Obama will do a good job representing their country to the world, according to a new national poll published as the U.S. president set off on his first overseas trip since taking office. 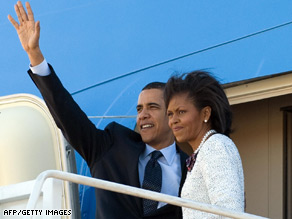 Barack and Michelle Obama wave from Air Force One before their departure for Europe.

Obama's itinerary includes Thursday's key G-20 meeting in London, followed by a NATO summit on the French-German border and visits to the Czech Republic and Turkey.

Seven in 10 people questioned in the CNN/Opinion Research Corporation survey, released Tuesday, believe that leaders of other countries respect Obama -- a figure in sharp contrast to predecessor George W. Bush's poll ratings at the equivalent stage of his presidency.

Just 49 percent of Americans believed that foreign leaders respected Bush shortly after he assumed office in 2001.

"Except for the period following the 9/11 attacks, that number never got any better for Bush," says CNN Polling Director Keating Holland. "Even among Republicans, a majority believes that other world leaders respect Obama."

Obama's popularity in Europe was highlighted last year during a pre-election visit to Germany, France and the UK when hundreds of thousands turned out to hear the then-presidential candidate speak in Berlin. His election success in November was widely celebrated across the continent.

But analysts say Obama is now under pressure to deliver on that popularity -- and will be held to higher standards than previous White House incumbents.

"If there is a trade war between America and Europe and, as a result, European jobs are lost, that would make Barack Obama unpopular," British political commentator Peter Kellner told CNN.

"Secondly if there was a sign to return the type of arrogance, as Europeans see it, under George W. Bush and other U.S. presidents that would damage his popularity."

The survey's sampling error is plus or minus three percentage points.