NEW YORK (CNN) -- The United States is seeking a seat on the U.N. Human Rights Council this year, the Obama administration announced Tuesday. This is a departure from the Bush administration, which was often critical of the group. 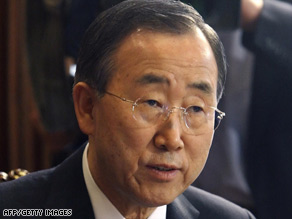 U.N. Secretary-General Ban Ki-moon says U.S. would have a significant impact on the human rights council.

Joining the council would signal the "new era of engagement" between the United States and other nations, the U.S. State Department said in a statement.

"Human rights are an essential element of American global foreign policy," Secretary of State Hillary Clinton said. "With others, we will engage in the work of improving the U.N. human rights system to advance the vision of the U.N. Declaration on Human Rights."

The United States will participate in upcoming May elections in hopes of joining the 47 other elected members of the council, which was established in 2006 to replace the discredited U.N. human rights commission that included members such as Sudan and Zimbabwe.

At the time, the United States was among four members of the U.N. General Assembly that voted against establishing the council, saying it would be no better than the previous body. The other three nations were Israel, Marshall Islands and Palau. But the council was created with an overwhelming 170 nations in support of it.

"The Human Rights Council has a critical role to play in the protection and promotion of all human rights for all people, and the U.S. has an important contribution to make to this end," Ban said. "Full U.S. engagement on human rights issues is an important step toward realizing the goal of an inclusive and vibrant intergovernmental process to protect human rights around the globe."

Jamil Dakwar, director of the American Civil Liberties Union's human rights program, said becoming a council member would mean "America will once again become a nation that leads by example."

Still, others were less pleased and echoed the Bush administration's concerns that the council was a heavily politicized body that expressed an anti-Israeli bias.

"Since its inception in 2006, the HRC has virtually ignored the major human rights violations of our times and instead has repeated the entrenched, institutionalized anti-Israeli bias of its predecessor, the Commission on Human Rights," the Anti-Defamation League said in a statement.

"We hope the U.S. will be vociferous in its representations against the one-sided, anti-Israel pronouncements and can be a force for change within the body," the group said.

President Bush, in a 2007 speech to the United Nations, accused the council of failing to crack down on oppressive governments. He named Cuba, Zimbabwe, North Korea, Venezuela and Sudan as nations in need of change.

"This body has been silent on repression by regimes from Havana to Caracas, from Pyongyang to Tehran, while focusing its criticism excessively on Israel," he said. "To be credible on human rights in the world, the United Nations must reform its own Human Rights Council."

Most recently, Israel recently criticized the Human Rights Council for a U.N. report it requested. The report claimed Israeli soldiers routinely and intentionally put children in harm's way during their 22-day offensive against the Palestinians in Gaza. A government spokesman called the the report another example of the "one-sided and unfair" attitude of the council.

Susan Rice, the U.S. ambassador to the United Nations, acknowledged Tuesday the council need to be "balanced and credible" to help people suffering from abuse and oppression around the world.

"The U.S. is seeking election to the council because we believe that working from within, we can make the council a more effective forum to promote and protect human rights," she said in the state department release. "We hope to work in partnership with many countries to achieve a more effective council."