Commentary: What happened to 'change we can believe in'?

By Alex Castellanos
Special to CNN 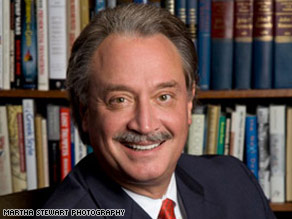 (CNN) -- Is there a better person than Paul Begala? Not on this planet. Beneath his proud partisan heart and chess-engine brain, there is an unfailingly generous, unswervingly decent human being, whom I am fortunate to call my friend.

And he's from Texas, just like George Bush. What's not to like? That makes it all the more remarkable that Paul is consistently wrong about almost everything political and in desperate need of a reality check.

Paul calls my commentary about the first glimpse of a Barack Obama who could be a one-term president "more full of beans than a burrito at Matt's El Rancho" in Austin, Texas.

Paul, I love burritos, so let's bite into this one, beans and all. This Republican finds it tasty.

Could Barack Obama be a one-term president? His popularity remains astonishingly high, but his policies, only 60 days into his term, do not fare as well.

Doug Schoen, one of President Clinton's pollsters, and pollster Scott Rasmussen wrote in the Wall Street Journal, "The American people are coming to express increasingly significant doubts about [Obama's] initiatives, and most likely support a different agenda and different policies from those that the Obama administration has advanced."

What happens next? Obama is proposing such a breathtakingly bold, massive transformation of America's economy that he will, in a short time, be defined by what he does, not just who he is. The gulf between his personal popularity and his actions will narrow.

This president will become his policies, as all activist presidents do. Will that make him vulnerable when he runs for re-election in 2012?

Imagine if, a week before he dispatched John McCain in November, Barack Obama had stood before the American people and told them what he would actually do.

"My fellow Americans, if you elect me president next Tuesday, I propose to grow our government to unprecedented size, increase federal spending to never-imagined levels and double the debt in our country. I will support $1.3 trillion in new taxes even as our recession deepens. I will take advantage of the crisis to expand federal control of health care, the energy industry, banks, Wall Street and the car business, fire GM's CEO and sign a stimulus bill with nearly 9,000 earmarks.

"I will undo much of Bill Clinton's welfare reform by giving 'tax cuts' to non-taxpayers. I will propose a crushing tax on energy, making it more expensive to drive to work or cook dinner. I will choose men who have not paid their taxes as my key economic advisers and will have no one in my Cabinet who can fairly be called a 'businessman.' I will shrivel the deduction charities count on for over 40 percent of their contributions.

"I will propose an omnipotent czar with the power to regulate, sanction and, ultimately, seize any business we judge could threaten the economy of this country. My Treasury Department will enable $165 million in bonuses to failed financial industry executives, and then I will give that industry an additional trillion-dollar bailout, indebting middle-class Americans to buy their toxic assets. All this I will do in my first two months, before April Fools' Day."

With this record, the candidate who campaigned as a new leader, beyond partisan politics and ideological conflict, has become a president who has put bipartisan cooperation out of reach with stunningly left-of-center, European-style agenda that no Republican can embrace and fewer Americans will endorse when they judge it in due time at the ballot box.

What is the Republican alternative? Yes, there is one. Surprisingly, it sounds a lot like what candidate Obama promised during his campaign.

That agenda promised real change in Washington. Candidate Obama pledged prosperity that would begin "from the bottom up," not the same old industrial age, top-down government he has to date delivered.

Republicans, too, want more spending to stimulate our economy. The difference is, we want the people, not the politicians, to do the spending. We want to cut out the Washington middle man and get money back into the hands of the American people as quickly and efficiently as possible, starting with real and lasting tax cuts.

Republicans want an economy where people are powerful and they direct investments in a diverse and choice-filled marketplace. President Obama proposes investing in big, Washington-directed, choice-limiting monopolies to run our economy.

Surely, in this moment of crisis, there are remedies only the federal government can administer -- but are we now to believe, after being promised change, that old, decaying, centralized big government is the Obama administration's only idea and the cure for every ill?

The candidate who most inspired me this past election was not John McCain. It was Barack Obama. My hopes for him and our country soared when he said, "We are the change we have been waiting for." I hoped Obama would usher in a new era of organic, not industrial-age government, something that looked more like the open-source movement and a lot less like the top-down command structure of Microsoft, the U.S. Army and the Catholic Church (forgive me, Lord).

An increasingly complex society cannot be run, cannot be organized by a few smart guys in Washington. Those subtle relationships, innate in billions of transactions, can only be organized bottom-up, through the elegant, natural and organic workings of that free and diverse community of Americans beyond Washington.

Republicans, humbled by loss, renewed by defeat, understand that. So, once, Mr. President, did you. At the top of your Web site during the campaign, you told us. There, against the beautiful blue background of a promising sky, next to a logo of a rising American sun, you wrote, "I am asking you to believe, not just in my ability to bring about real change in Washington. ... I am asking you to believe in yours."

Come back, candidate Obama. I want a president who still believes that.

Until then, Paul, there will be a competitive race for president in 2012. President Obama has made sure of that.

Ironically enough, the Republican message will be "Change."