(CNN) -- President Obama announced Monday that struggling automotive giants General Motors and Chrysler will be given a "limited" period of time to "restructure in a way that would justify an investment of additional taxpayer dollars." 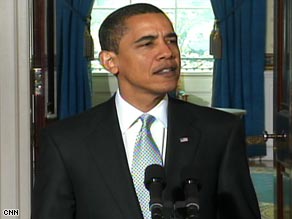 The federal government will give GM "adequate working capital" over the next 60 days to work in conjunction with the administration in developing a better recovery plan, he said.

Chrysler will be given adequate capital to continue operations for 30 days while completing a merger with automaker Fiat.

The president said that if Chrysler can come up with a "sound agreement that protects American taxpayers, we will consider lending up to $6 billion to help their plan succeed."

Obama also indicated that both GM and Chrysler might need to file for bankruptcy in the process of successfully restructuring, which will involve working with creditors, unions and other stakeholders.

"While Chrysler and GM are very different companies with very different paths forward, both need a fresh start to implement the restructuring plans they develop. That may mean using our bankruptcy code as a mechanism to help them restructure quickly and emerge stronger," Obama said in remarks delivered at the White House.

To help bolster consumer confidence during the companies' potential bankruptcies, the president promised that the federal government will immediately begin backing their warrantees.

The administration gave GM and Chrysler failing grades Monday for their turnaround efforts so far. The restructuring plans submitted by the two automakers do not go far enough to warrant the substantial new federal support, Obama said.

But, he added, "We cannot, we must not, and we will not let our auto industry simply vanish.

"This industry is, like no other, an emblem of the American spirit; a once and future symbol of America's success."

The president also warned, however, that the automakers cannot depend on federal assistance indefinitely.

"We cannot make the survival of our auto industry dependent on an unending flow of tax dollars. These companies - and this industry - must ultimately stand on their own, not as wards of the state."

Senate Majority Leader Harry Reid said in a statement Monday that he shares Obama's "commitment to these objectives, and commend his Administration for showing a firm resolve in its negotiations with GM and Chrysler."

"We will not give these companies a blank check. As we have maintained since the earliest days of this crisis, if these companies do not develop strong plans to remain viable in the long term, they will lose our support," he said.

But Senate Minority Leader Mitch McConnell, R-Kentucky, lashed out on giving any more bailout funds to the beleaguered automakers.

"We are now told these two companies are getting their last check from the taxpayers, and that if they don't finally come up with truly viable plans then they'll be forced into bankruptcy. Unfortunately, we've heard this before, from both this and the previous administrations," he said in a statement.

Sen. Bob Corker, R-Tennessee and member of the Senate Banking Committee, said this is a "major power grab" by the Obama administration.

"This is a marked departure from the past, truly breathtaking, and should send a chill through all Americans who believe in free enterprise. I worry that in one fell swoop we've lost our moral high ground throughout the global community as it relates to chastising other countries that use strong arm tactics to invade on private property rights," he said in a statement.

Some of Michigan's congressional delegation weighed in after the announcement, laying out the stark reality the automakers that call their state home are now facing.

"The road ahead is going to be very difficult and painful, although, as the president said, there is potential for both companies to emerge from restructuring as stronger, more competitive companies," said Rep. John Dingell, D-Michigan. "I stand ready to roll up my sleeves and get to work."

"We can do no less because the domestic automotive sector is the heart of the U.S. industrial base, and as the President said, 'it is a pillar of our economy,'" he said in a press release Monday.

Rep. Candice Miller, R-Michigan, said that it's now up to the administration to step up to the plate and get things done.

"The President and the Auto Task Force have now determined that they know better how to run these complex manufacturing organizations and are going to force changes," she said in a press release. "By implementing these changes they now become accountable for achieving success.

"We have little time to force positive change, so it is time once again to roll up our sleeves, put our heads down and get to work," she said.

Rep. Brad Sherman, D-California, said Monday that it's not time to "hollow out our manufacturing sector" while providing taxpayer dollars to AIG, which faced public backlash over multimillion-dollar bonuses.

"All of the creditors of General Motors are losing substantial amounts -- even people who worked their whole lives expecting retirement benefits and health benefits when they retire," Sherman said. "What about the rich and powerful that AIG was owed money to? They are getting paid every penny. They demand it, and it comes from the American taxpayer."

GM's restructuring began early Monday when CEO Rick Wagoner announced his resignation, which he said came at the request of the Obama administration.

"On Friday I was in Washington for a meeting with Administration officials. In the course of that meeting, they requested that I 'step aside' as CEO of GM, and so I have," Wagoner said in a statement posted to the GM Web site.

He is being replaced by Fritz Henderson, who was GM's chief operating officer. Kent Kresa will serve as interim chairman.

"Having worked closely with Fritz for many years, I know that he is the ideal person to lead the company through the completion of our restructuring efforts. His knowledge of the global industry and the company are exceptional, and he has the intellect, energy, and support among GM'ers worldwide to succeed," Wagoner said.

Over the past year, Obama noted, the domestic auto industry has lost 400,000 jobs.

CNN's Ed Hornick and CNNMoney.com contributed to this report.