Obama team deploys campaign tactics to get point across

WASHINGTON (CNN) -- From fielding questions online, to the staging of events across the country, to deploying thousands of volunteers, President Obama and Democrats are using the same tools that helped them win the White House to push the administration's agenda. 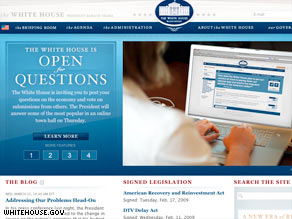 President Obama held an online town hall, in which people could send in questions from their computers.

Supporters say the same tactics used during the campaign also work to educate Americans about the president's proposed budget and the stimulus plan.

Political experts say in order for Obama to keep his approval ratings high, he will need his agenda to be successful. To do that, they say, he and the White House will need to keep up the sales job.

The legions of volunteer supporters from the 2008 election are key to that effort. Democrats have a database of more than 13 million e-mail addresses and are eager to harness that support.

The Democratic National Committee has formed a new group called Organizing For America. Last weekend, it organized 10,000 volunteers to canvass across the country to get 100,000 people to pledge support for the administration's policies.

"We are going to learn lessons or use the lessons we learned from the campaign, learn new lessons along the way, using the same tactics we used during the campaign but also developing new ones to promote the president's agenda."

Republican political experts say this is all smart politics.

"It is part of the 21st century, and it is part of being the leader of the free world and having to make sure you keep people engaged, enthusiastic, giving money, supporting candidates and supporting your agenda."

Those who pledged support received follow-up e-mails this week asking them to call members of Congress to lobby them to pass the budget. Officials involved in the project said their efforts were not just aimed at the true believers.

Last weekend's canvassers didn't visit only the party faithful -- they went to all the homes on a given street.

"...We're not targeting a congressional district. We're not targeting individual voters. We are providing our supporters with information on the budget, why it's important and if they want to engage on that issue they can," Stewart said. "And we are then going to get those pledges to all members of Congress.

"So regardless if they are Democrat or Republican if there are 1,000 pledges in their congressional district or 30, we're going to give those to the members."

"This is something they will continue to do. It is not completely consistent with a new kind of politics that Barack Obama promised, but at the end of the day it is not how you start -- it is how you finish," he said.

"Will President Obama's policies energize these individuals and keep them engaged -- or will his policies and a lack of results lead to a lack of enthusiasm and engagement?" Diaz said. "That is the question."

Organizers say they are taking a bottom-up approach that also allows local groups to rally around a cause or propose their own project.