WASHINGTON (CNN) -- How does the American public feel about the war in Afghanistan? In a word, wary. 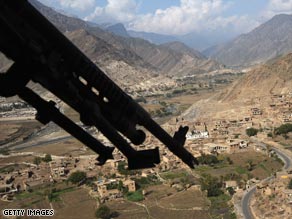 U.S. forces have been engaged in fierce fighting to oust the Taliban in Afghanistan.

"The United States of American did not choose to fight a war in Afghanistan. Nearly 3,000 of our people were killed on September 11, 2001," Obama said Friday.

"We have a clear and focused goal: to disrupt, dismantle and defeat al Qaeda in Pakistan and Afghanistan," he said.

Stressing that "the safety of people around the world is at stake," Obama said the "situation is increasingly perilous" in the region in and around Afghanistan, where the United States has been fighting al Qaeda and the Taliban for more than 7½ years after attacks in New York and at the Pentagon.

Nevertheless, the American public has been wary about the war in Afghanistan, according to a CNN/Opinion Research Corp. poll conducted in February.

Last month, Americans were almost evenly divided between those who support the war and those who oppose it, the poll showed, with 47 percent in favor and 51 percent opposed.

The anti-war movements in Vietnam and Iraq helped define what the Democratic Party stands for.

"If we don't learn from our Iraq experience, we are doomed to repeat it," Rep. Lynn Woolsey, D-California, said on the House floor Thursday.

Why are Americans wary about Afghanistan? The recession. Iraq War fatigue. And frustration.

Last month, when President Obama said he would send 17,000 more U.S. troops to Afghanistan, the public was willing to give him the benefit of the doubt.

Democrats were willing to go along with the president, but they were less enthusiastic than Republicans

Americans have far less confidence in them.

The CNN/Opinion Research Corp. poll surveyed 1,046 adult Americans by telephone on February 18-19, 2009. The sampling error is plus or minus three percentage points.