WASHINGTON (CNN) -- President Obama plans to send another 4,000 troops to Afghanistan along with hundreds of civilian specialists in an effort to confront what he considers "the central challenge facing [that] country," senior administration officials said Thursday. 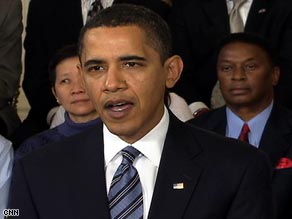 President Obama is expected to announce new strategies for Afghanistan and Pakistan on Friday.

The president also will call on Congress to pass a bill that triples U.S. aid to Pakistan to $1.5 billion a year over five years, the officials said.

Obama is expected to announce new strategies for both countries Friday.

The troops, which are in addition to the 17,000 the president announced earlier would be sent to Afghanistan, will be charged with training and building the Afghan army and police force. The plans include doubling the army's ranks to 135,000 and the police force to 80,000 by 2011, the officials said.

In a background briefing with reporters, one official painted a somber picture of the situation.

"Al Qaeda's central leadership has been moved from Kandahar, Afghanistan, to a location unknown somewhere in Pakistan," he said. "And in that location they're plotting against the United States. They are working with their friends and partners, the Taliban, against American interests."

The plan marks a new strategy, focusing on the growing threat in Afghanistan and now Pakistan, the officials said.

Watch how the U.S. will target terror safe havens »

The goal, said one official, is to "disrupt, dismantle and defeat al Qaeda and destroy the safe haven that has developed in Pakistan and prevent it from rebuilding in Afghanistan."

Earlier Thursday, Director of National Intelligence Dennis Blair told reporters that the United States needs to improve its level of intelligence support for military operations in Afghanistan. Blair also said a lot more work is needed to get Pakistan on the same page as the United States in fighting terrorists along the border.

The plan does not include an exit strategy. A senior administration official said commanders on the ground would make periodic assessments.

"This is a strategy, not a straitjacket," the official said.

Obama has spoken with the leaders of Afghanistan and Pakistan, officials said, and was "gratified by their reception."

Secretary of State Hillary Clinton plans to attend a U.S.-backed international conference on Afghanistan next week at The Hague, State Department officials said.

All About Afghanistan • Al Qaeda