Social Security, SSI recipients to receive $250 check in May 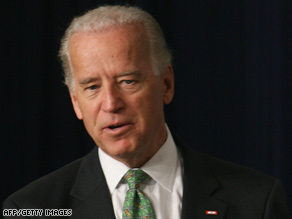 Vice President Biden says the checks will "make a big difference" for older Americans and those with disabilities.

Biden also announced the distribution of $3.2 billion in new funding for state and local energy efficiency programs from the Department of Energy.

The $250 checks "will make a big difference in the lives of older Americans and people with disabilities -- many of whom have been hit especially hard by the economic crisis that has swept across the country," Biden said in a written statement.

The energy efficiency funds will come in the form of "formula grants for projects that reduce total energy use and fossil fuel emissions," according to a separate White House statement.

"Local leaders will have the flexibility in how they put these (energy efficiency) resources to work, but we will hold them accountable for making the investments quickly and wisely to spur the local economy and cut energy use," Biden said.

Biden, who made the announcement at a meeting with several Cabinet and other senior White House officials, is the administration's point man in overseeing the distribution of the $787 billion stimulus plan.

He is being assisted by former Interior Department Inspector General Earl Devaney, who has been tapped to head a new Recovery Act Transparency and Accountability Board.

All About Joseph Biden • National Economy