(CNN) -- President Obama hosted what amounted to an interactive fireside chat Thursday, answering questions from people around the country in the first online town hall discussion ever hosted at the White House. 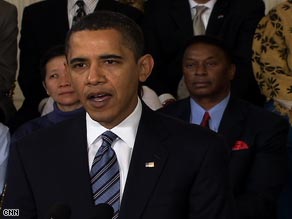 Standing in front of a TV screen and joined by a live audience, the president fielded online questions concerning education, the mortgage crisis, job outsourcing, national service, assistance for veterans and health care.

Four of the six virtual questions were displayed on the screen in a written format; the other two were video submissions.

Almost 93,000 people submitted more than 104,000 questions to the administration's Web site, WhiteHouse.gov, which streamed live video of the meeting.

Obama had promised to answer the most popular questions as decided by online votes; the site had recorded more than 3.6 million votes for specific questions by the time voting closed Thursday morning.

Obama also fielded questions from the audience joining him in the East Room of the White House.

As the town hall got under way, the president repeatedly steered the discussion toward larger economic themes, most notably the recent spike in job losses. He warned that even if the economy has already bottomed out, unemployment probably would continue to get worse.

Unemployment, he said, is typically a lagging economic indicator.

In a lighthearted moment, the president said that the White House had received many questions about the potential economic upside of legalizing marijuana. Obama did not display any of the questions, but he did briefly address the topic.

"This was a fairly popular question. ... I don't know what this says about the online audience," the president joked. "No, I don't think this is a good strategy to grow our economy."

Obama also discussed education reform, an issue he has championed during the 2008 presidential election and during his time in the White House.

Obama, responding to a question about school reform, said more money is needed to bring about change.

"So a lot of times in Washington, we get an argument about money versus reform. And the key thing to understand about our education system is we need more resources and we need reform," he said. "If we just put more money into a system that's designed for the 19th century and we're in the 21st, we're not going to get the educational outcomes we need."

Obama, who revolutionized the use of technology as a political tool during his campaign, is the first president to address questions from the public live on the Internet. By allowing people to submit any question they want and answering selected ones live on the Web, the administration hopes to create a more transparent style of governing that will help win public support, political observers say.

"This is just the tip of the iceberg," said Don Tapscott, author of "Growing Up Digital," a book exploring the generation that has grown up on the Web.

"It turns out that the Internet is a new medium of human communication that not only helps you get elected, it changes the way you govern."

Former presidents George W. Bush and Bill Clinton engaged in online chats with citizens, but neither relied on the Internet as a platform for reaching the American public as Obama does, said Andrew Rasiej, co-founder of the Personal Democracy Forum and the techPresident blog.

"It's changing the relationship between the president and the country," Rasiej said. "It's building on a 21st-century information-age platform. We want to make sure our president isn't stuck in a bubble."

Some observers wondered whether Obama's creative social media initiatives, dubbed Obama 2.0, would continue once he entered office. But Thursday's online meeting -- potentially the first of many -- reaffirms his commitment to engaging with Americans through technology, Rasiej said.

Adam Ostrow, editor of Mashable.com, a guide to social media, says the online town hall-style meeting will encourage Americans to get involved beyond the election.

"It gives people a sense of participation and [of being] able to shape some of the decisions that will be made," he said.

CNN's Stephanie Chen and Ed Hornick contributed to this report.