Jindal defends those who want Obama to fail 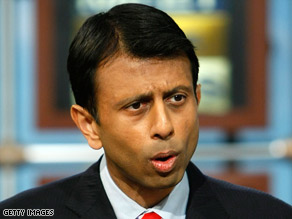 Gov. Bobby Jindal is offering a spirited defense of Republicans who say they want President Obama to fail.

Jindal described the premise of the question -- "Do you want the president to fail?" -- as the "latest gotcha game" being perpetrated by Democrats against Republicans.

"Make no mistake: Anything other than an immediate and compliant, 'Why no sir, I don't want the president to fail,' is treated as some sort of act of treason, civil disobedience or political obstructionism," Jindal said at a political fundraiser attended by 1,200 people. "This is political correctness run amok."

Since conservative radio talk show host Rush Limbaugh said that he hoped that Obama would fail, Republicans have been pressed by Democrats and the media about Limbaugh's comments.

Jindal, a potential 2012 presidential candidate, told the Republican audience he would "not be brow beaten on this, and I will not kowtow to their correctness."

"My answer to the question is very simple: 'Do you want the president to fail?' It depends on what he is trying to do."

Jindal, who served two terms in the U.S. House, returned to Washington to help his former colleagues raise more than $6 million for the 2010 midterm elections. And he likely picked up important political chits, should he decide to run for president.

So far, Jindal has sidestepped questions about 2012. But on Tuesday he seemed to be laying the groundwork in case he eventually decides the political climate is right. A video of favorable back-to-back TV reports about Jindal preceded his introduction to the audience. And Jindal used his remarks to deep-pocketed Republican donors to emphasize his vision for how the Grand Old Party can get back on track.

He made a point to criticize Obama and House Speaker Nancy Pelosi for a "spending spree" that he said "is costing the taxpayers more than the Iraq war, more than the Vietnam War, and, near and dear to my heart, even more than the Louisiana Purchase."

Jindal singled out House Republicans for standing up to Obama and helping the GOP return to its conservative roots.

The governor took a controversial stand when he refused to accept $98 million in federal stimulus money to expand unemployment benefits in Louisiana, because he said it would force an unfair tax on businesses when the funding ran out.

Democrats and other critics blasted Jindal's decision, saying he was influenced by presidential ambitions. But many conservatives saw his decision as a principled stand.

Moments after Jindal wrapped up his remarks Tuesday, Obama held his second prime-time news conference 12 blocks away at the White House. Last month, Jindal delivered the Republican response following Obama's joint address to Congress. The governor was widely panned for his performance, which he addressed Tuesday at the top of his speech.

"Many of you have asked that I reprise my State of the Union response speech," Jindal said. "That was a joke by the way. It's OK to laugh about it.

"I have just learned that because of President Obama's opposition to torture, it is now illegal to show my speech to prisoners at Gitmo," he added.

The governor's speech then took on a serious tone when he emphasized the need for Republicans to put the 2008 election behind them and embrace the role of loyal opposition party.

"It's time to declare our time of introspection and navel-gazing officially over," Jindal said. "It's time to get on with the business of charting America's future. So, as of now, be it hereby resolved that we will focus on America's future, and on standing up for fiscal sanity, before it is too late."

With the next presidential election three years away and the fact that he has to face Louisiana voters in 2011 if he seeks re-election, it is not surprising that Jindal does not publicly express interest in running in 2012.

But if the governor is considering a presidential bid, he must now focus on learning to become a national candidate and building a political operation.

Unlike potential 2012 rivals such as Mitt Romney and Mike Huckabee, Jindal doesn't have a national infrastructure in place, nor the experience the two men gained crisscrossing the country in their failed 2008 bids for the White House. And Jindal lacks the name recognition of Alaska Gov. Sarah Palin, a former vice presidential nominee who is said to be considering her own campaign in 2012.

GOP operative Alex Vogel said it is critical for Jindal or any other Republican candidate to begin amassing a list of national supporters similar to what Obama created for the 2008 campaign.

"It is all about data," said Vogel, a former senior aide to the Republican National Committee, the National Republican Senatorial Committee and ex-Senate Majority Leader Bill Frist. "The best candidate in the world is only as good as his database. How many cell phone numbers, e-mails and mailing addresses can you collect? You can't collect that in a presidential campaign. You have to do that now."

Vogel also said that beyond "fine-tuning his message," Jindal needs to continue giving speeches, attending political events and appearing on television if he wants to get used to running for national office.

At 37, Jindal potentially has a long political future, whether or not he runs for president in 2012.

"There is plenty of time between now and the primaries for him to tighten his game," said Jonathan Grella, a GOP strategist who has worked for former House Majority Leader Tom DeLay and the National Republican Senatorial Committee.

"He obviously has got a long ways to go before he performs at a presidential level, and particularly at the Obama level. That is a tall order. But Bobby Jindal is an above-average political performer now, and he has plenty of room to grow."