Editor's Note: Republican strategist Alex Castellanos was a campaign consultant for former Massachusetts Gov. Mitt Romney's 2008 presidential campaign and has worked on more than half a dozen presidential campaigns. Castellanos is a partner in National Media Inc., a political and public affairs consulting firm that specializes in advertising. For a rival view, click here 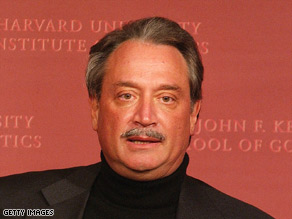 Alex Castellanos says President Obama's spending will create a mountain of debt and problems for Democrats.

We have made them give it back, but they have to keep the trillion-dollar bailout.

Apparently, our education system is worse than we thought. Neither the president nor Democrats in Congress actually read the bailout-bonus bill.

Per-family household debt more than doubled from 1989 to 2007, going from $42,000 per family to $97,000 per family, in inflation-adjusted dollars. Most of it, 85 cents of every dollar, is home equity or mortgage debt. This is not the consumer's fault for borrowing it, nor Congress' fault for legislating it, nor the Fed's fault for enabling it, nor Fannie Mae's or Freddie Mac's fault for packaging it. This is all Wall Street's fault.

It is also all George W. Bush's fault.

If there were an inheritance tax on problems, Obama could pay off any deficit.

Taxpayers living next to a toxic waste dump is a bad idea. Taxpayers buying a trillion dollars worth of toxic assets is good idea.

Taxpayers borrowing a trillion dollars to buy those toxic assets is an even better idea. Though it is still Bush's fault.

Obama isn't on the ballot next year, but Democrats in Congress are. You can make money betting they will lose more than 25 seats, but not as much money as by purchasing toxic assets with taxpayer dollars.

The problem with America's economy is that the last bubble, the "home-mortgage, derivative, credit default swap bubble" popped, as all economic bubbles eventually do. We must never let that happen again.

It is imperative that we re-inflate this bubble immediately.

If we all loan a lot of money we don't have to each other, we will all be more prosperous.

An Obama press conference offers hope to everyone. Both those who want to drive the deficit up and drive it down receive encouragement.

A dollar when given to failed auto companies or hollow banks has great stimulative value for the economy, but there's almost no dampening cost to the economy when the dollar is taken from taxpayers, who will have to pay our debt back.

If he does not drive the deficit down, within this decade, interest on the Obama debt will total more than a trillion dollars a year.

Bush was laughed at for saying, "Yes, we are getting the job done. It's hard work," though it's OK for Obama to say only hard decisions reach his desk.

Enhanced border security was a bad idea when Sen. John McCain and Republicans proposed it but a good idea now that Obama is for it.

Trickle-down economics from Republicans got us into this mess. Trickle-down government from Democrats will get us out of it.

Washington was doing such a great job making things work before the meltdown that we should give it more to do, like running health care, the energy industry, banks, Wall Street and the car business.

Our economy is so complex that millions of Americans can't plan for it, but Timothy Geithner and a couple of other smart guys in Washington can.

We have to short-change charities that help people, so government can help people.

Wall Street and the U.S. government are too big to fail though the American taxpayer isn't.

The Barack Obama experiment, conducted by this 47-year old man, is the riskiest economic wager the world has ever seen.

Next year, when this experiment in European-style socialism isn't working, the Democrats up for re-election will panic and make the spending this year look like an appetizer. To appear responsible, they then will raise taxes on "upper-income taxpayers" to the stratosphere, paralyzing investment and the economy.

Obama's communications gifts are powerful and poetic -- but round-the-clock campaigning on "The Tonight Show With Jay Leno," "60 Minutes" and this press conference won't save bad policy. Nothing kills a bad product quicker than good advertising. iReport.com: What did you think of Obama's press conference?

Obama has never built a business, created real wealth or produced tangible prosperity. His understanding of our economy is theoretical and academic.

Obama is a privileged young man who has not yet made many mistakes in his life. Having a president who belongs to the Harvard elite and the community-organizer streets is not the same as having a president who has lived a long life among middle-class Americans and understands them.

Impatience lies not deep beneath the surface of Obama. There is no shortage of self-confidence in this young man. It is a short step from such confidence to arrogance.

Arrogance in a politician is not healthy. Hubris, combined with inexperience, can be fatal. Obama could be a one-term president.

Obama is looking a little older. There would be nothing wrong with acting like it.